How A U.S. Flag Came From Battle And Into Country Music’s Hands 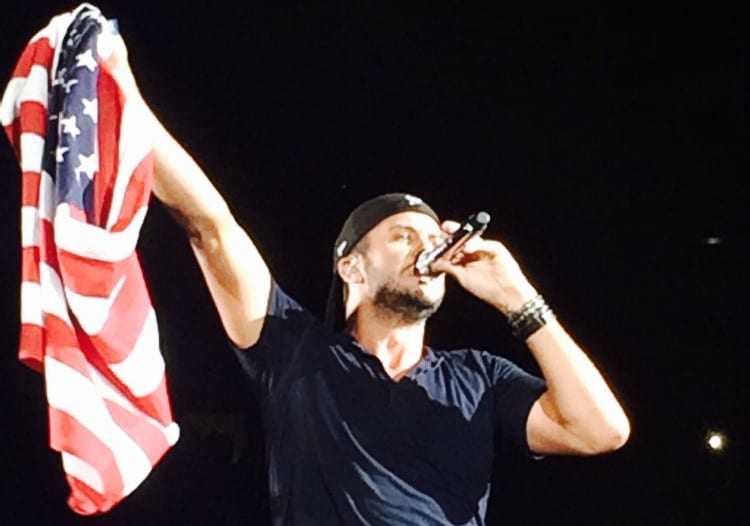 How a u.s. flag came from battle and into country music’s hands

The coolest thing about Whiskey Riff in our short existence has been the fan interaction and involvement. We truly feel like we’re building some awesome relationships with you, the Whiskey Riffers.

It’s especially special when someone reaches out to us wanting to share a story like this. A story involving a US Vet, an American flag, and country music. The following was sent to us from Tim Roche…

The flag was sent to me by my best friend, 1LT Christopher McCole, from the Maiwand District of Kandahar, Afghanistan. While deployed with D Company, 1st Brigade, 82nd Airborne Division, Chris carried this flag with him on missions and it was also used to take the squad photo just before Memorial Day 2014. Chris had some other flags that were flown over the base, which he sent to other friends and family who framed them and hung them up. But with this flag being unique and with our love everything for which the flag stands, we decided that it was going to travel, have fun, and be a symbol. While Chris was returning to the U.S., some of our other friends and myself were at the Luke Bryan concert at Soldier Field. After a long tailgate in the harbor and before we even got into the stadium one of our friends turns to me and goes “I bet you can’t get the flag on stage!” Because I am an AmeriCAN and not AmeriCANT, I said “Like hell I can’t” and disappeared. We were sitting in the 200 level Cadillac Club seats a long way from the field and the stage. But after some sneaking around and some very patriotic security guards, I wound up in the front row. During “Kiss Tomorrow Goodbye,” Luke grabbed the flag from my hands and the crowd went nuts. It is really all a blur between the Bud Light, Fireball, and the excitement, but when Luke came out during his encore he was again grabbed the flag and ran around on stage with it. A couple months after this show and Chris’ return stateside, Chris received a Facebook message from a member of his Platoon who was still in Afghanistan saying that he thought he saw the flag on The Armed Forces Network during an episode of Nightline featuring Luke Bryan. After looking it up, Chris was able to verify that it was indeed the same flag that they had carried in Afghanistan. A couple weeks after the Luke Bryan concert, I left Chicago to visit Chris at Fort Bragg, North Carolina. While Chris was still in Afghanistan, we had made plans to see Jason Aldean and FGL in Raleigh, NC. This was his first concert since returning from deployment a few weeks prior. This time we were sitting in the lawn seats and I was able to sneak my way up to the front row again. Jason Aldean then grabbed the flag and took it on stage. My phone immediately rings and it is Chris from the lawn seats laughing and saying “when your good, you’re good.” After the show, I thought why not try to get it on stage at every concert I go to. A couple months later, the same crew from the Luke Bryan concert went to see Cole Swindell at Joe’s on Weed St. This time it was a little more planned out. We got there early so we would be in the front and I waited to pull the flag out during “Ain’t Worth the Whiskey.” Cole grabbed the flag right before raising “a glass to those saving our ass overseas.” Then came The Windy City Smokeout and Granger Smith. This ended up being the easiest of them all. I had no problem getting up to the stage and there was absolutely no hesitation from Granger. The most special one of them all is Chase Rice. When Chris was on leave before his deployment, we discovered a song called “PB&Js and PBRs,” which basically became our anthem to that week of partying. At this point, someone suggested reaching out to the artist on social media about the story of the flag, so we posted on Chase’s Facebook. When Chase came onto stage, he saw the flag and said,”I got you.” Towards the end, he came down and took a picture with me and the flag. He then gave it to the band on stage and they rocked out with it. The flag has traveled to many states and the goal is to make it to all 50 of them. It has also traveled to Africa and Europe, so it has been to 4 of the 7 continents. We are hoping to make it to all 7 including Antarctica. In two weeks, I am traveling to New York City to see Chris and once again, the flag will be by my side. The first thing we are going to do is visit Ground Zero and the 9/11 Memorial, bringing one of the major reasons Chris went to West Point and served in Afghanistan, full circle.

Thank you for taking the time to read the beginning of the story of the flag, the rest is still unwritten. We do not believe most artists who have taken this flag on stage know the history of this flag, but maybe it will finally reach them with your help.