Ok look, just to set the record straight right off the bat… I made the meme.

I made the meme, I shared it to Instagram, and then I posted it again on Twitter the next morning because it still made me laugh… and made our fans laugh too. But we’ll get to all of that later… let’s quickly set the scene here to provide a little bit of context.

After Tuesday night’s shit show of a Presidential debate, CNN’s Jake Tapper eloquently described the evening as a “hot mess, inside a dumpster fire, inside of a train wreck.”

And naturally, funny people across the interwebs took it and ran with it.

Admittedly, I like to be a little more creative when it comes to my meme creation, but you never look a gift horse in the mouth, amirite? So there it was, ripe for the picking, a viral meme template that could be utilized so perfectly to describe how I feel every time the Nashville pop country machine squeezes out another turd and tries to sell me on it like it’s the second coming of Merle Haggard. I just had to pick said turd.

Any time you make a joke about an artist’s music, it’s inevitably going to piss some people off. And sure a few of the FGL stans came out to defend them, but overall, the Whiskey Riffers got a kick out of it, we all had a good laugh and we all went about our day.

Except for Brittney Kelley…

Brittney, the wife of FGL’s Brian Kelley and self-described “mental health enthusiast,” didn’t find it funny at all. So much so, that she thought an appropriate response to a meme about her husband’s music, ONLY about her husband’s music, was to share Steve’s personal Instagram account in an obvious effort to incite her “fans” to come after him, his wife, and their first baby. 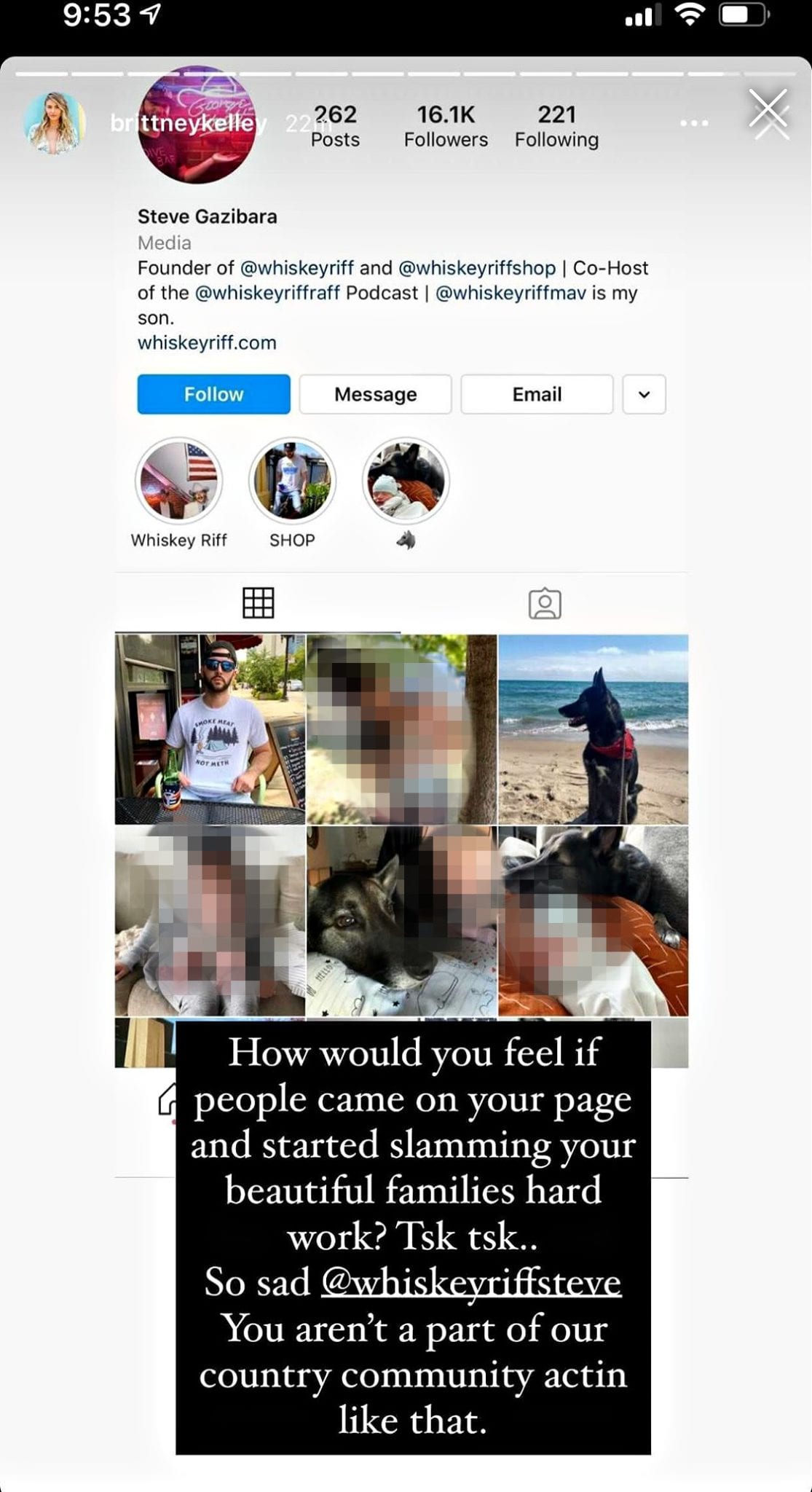 “How would you feel if people came on your page and started slamming your families (should be “family’s” but I’m not a stickler) hard work?”

IT WAS A MEME.

Nobody “came” on your page and nobody brought family into it except…. oh wait, YOU. You’re the one who, without any knowledge of the who made the meme, brought Steve’s family into it by sharing his personal Instagram details with photos of his wife and newborn son. Also, we blurred out the screenshot of Steve’s profile for this post, Brittney did not. She was clearly trying to get people to attack his family, not Whiskey Riff.

She didn’t come at the Whiskey Riff Instagram page, she didn’t come at the Whiskey Riff business as a whole, she didn’t comment on the meme itself with something funny and witty like others have in the past. For fuck’s sake we used to rate Chris Young’s selfies on Twitter, a joke that he took in stride and now we all laugh about it together when we’re drinking tequila at Tin Roof. Nope, she took the low road and got personal.

And while it’s a pretty shitty move, it’s not like anybody actually showed up on Steve (or his wife’s) Instagram to talk shit. In fact, it was quite the opposite. The only messages he got were from people who saw that Brittney was going off the rails and wanted him to know what she was doing.

And as for being part of the country community? Which community is that you’re talking about? Some elite Nashville bubble where we all pretend everything is AMAZING and then talk shit behind each other’s back? The one where nobody has the audacity to disagree with anybody about anything? The one where opinions are frowned upon, hot takes are shunned, content is stolen, creativity is stifled, humor is atrocious, and to hell with conviction, making money is the driving force behind everything? That community? You can keep that. We also don’t even live in Nashville, and never have if that’s what you thought.

No, we’re fans first. That’s the community we’re in. We’re not in your club Brittney, we’re down on the ground with the fans, the real country music fans that actually care about country music.

Clearly you’ve never read an article on the site, never listened to a podcast, never seen an awards show live tweet, and never even had half a clue about what we do here. Feel free to read our take on their new single “Long Live,” or our opinion of “Swerve.” Hell, their last single “I Love My Country” was so damn similar to Kane Brown’s “Short Skirt Weather” that they had to add Kane and company to the list of writers. Even our 2019 list of “Worst Country Songs,” AND our 2018 list, feature some of FGL’s finest.

Imagine if a beat writer was talking about the Bears game yesterday, critiquing that shit offensive performance, and Nick Foles’ wife got on Instagram and started sharing the writer’s personal profile. Imagine if every time they covered a player’s poor performance they had to worry about somebody coming after their family. It’s absolute lunacy to think that would be ok and even more hypocritical from someone that claims to be a “mental health enthusiast.”

There are some artists we like and some artists we don’t like, but at the end of the day, it’s always solely about the music, it’s never personal. And on that note, I’ll just go ahead and tell you right now that I think FGL’s ship has sailed.

Sure, they’ll still have their core fans who will show up to shows and they’ll still get radio hits, but even in the duo category alone they’ve been passed by Brothers Osborne and Dan + Shay, not to mention Maddie & Tae and even the unsigned boys at Muscadine Bloodline, both of whom have been killing it lately.

So if one meme got you this fired up, I’d advise you to log off the internet indefinitely… because there is A WHOLE LOT more where that came from.