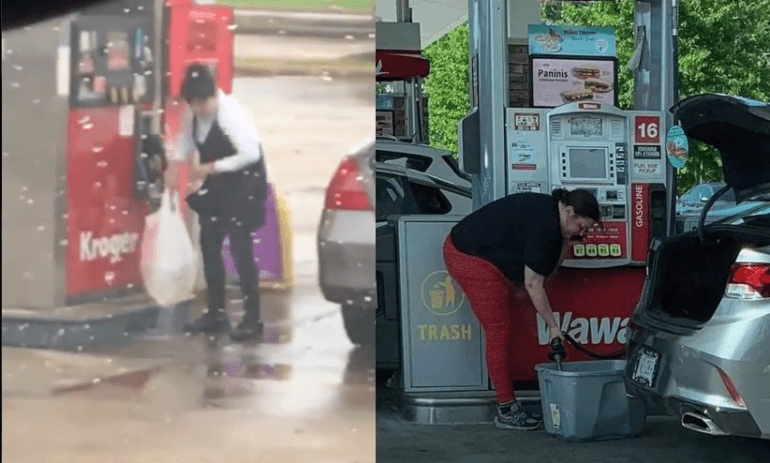 It seems gas isn’t the only thing we’re experiencing a shortage of these days. Apparently a lot of people are missing some common sense too.

After a cyberattack shut down the Colonial Pipeline and disrupted the supply of gasoline to the south and the east coast, gas stations across the area are running out of gas and Americans started doing what Americans always do when they hear there’s a shortage of something:

It happened last year with toilet paper, and for weeks we saw empty shelves as people rushed out to buy up carts full of more TP than a person with normal bowel movements could use in a year.

Well here we go again, except this time it’s gasoline.

Pictures and videos have already started popping up from around the southeast of people hoarding gas – even in states where the supply isn’t impacted by the Colonial Pipeline outage. There are fights breaking out at gas stations. And some people are finding creative ways to stock up.

Now, some are just showing up to the pump with a car full of gas cans, which is an asshole move on its own because it’s shit like this that creates shortages in the first place.

READ NEXT: Chick-fil-A Is Now Limiting Sauce Due To Industry-Wide Shortage

I don't know who needs to hear this, but the only #GasShortage2021 will be caused by morons like these panic hoarding gas. STOP IT. pic.twitter.com/P3MyRxBC9x

But some people are taking it to a whole new level, filling up plastic barrels.

I keep my gas in the 10$ trashcans from Walmart like a responsible American pic.twitter.com/qp5P2digzj

Or even plastic storage bins.

Now somebody tell me how in the hell she’s going to get that home without spilling it all over her car, much less actually get it into her gas tank.

But as if these aren’t bad enough, a video started making its rounds of a woman filling up PLASTIC BAGS full of gas.

Well, it turns out this video was actually from 2019…

But because of all the panic buying and hoarding and people putting gas into pretty much anything that will hold it right now, the government felt the need to issue what should have been a commonsense reminder:

Do not fill plastic bags with gasoline.

The US Consumer Product Safety Commission went on to explain the danger of gas igniting when it’s stored in unapproved containers, because this is apparently a thing that we need to warn people about right now.

Of course, people online laughed at the fact that this was actually something that needed to be said.

The fact that this has to be said… https://t.co/oIaUcwjX6W

this is correct. use paper bags. it's better for the environment. https://t.co/2MGtaAdaHd

WATCH NEXT: Dad Screams “I’ll Beat That Mask Off Your Face” As Embarrassed Son Physically Carries Him Out Of Store Heading out to stock up on gasoline, but we want to be sustainable. So we're going to pump it into these reusable bags instead of the usual plastic bags. See ya in a bit. pic.twitter.com/2UxXADCKal

Those are for milk, eh. https://t.co/aacAnvORdm

Oh man, when even Canada’s making fun of you…

But the fact remains, every ridiculous warning label is there because somebody did something stupid at some point.

And with the way people are acting right now, it’s probably best to just put out a gentle reminder anyway: Don’t be like this lady.