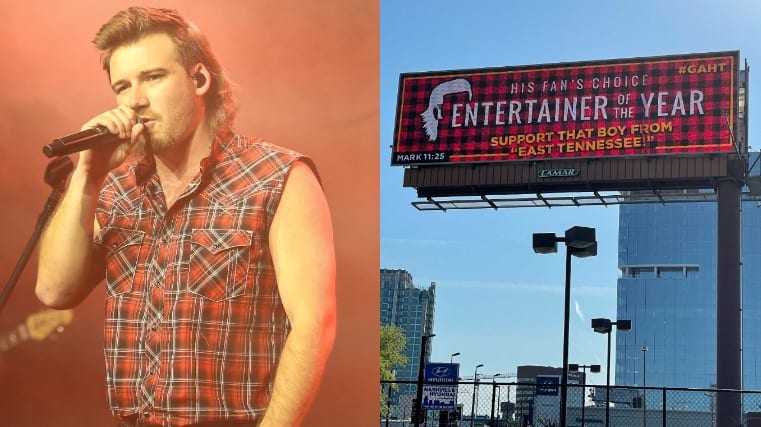 Welp, Morgan Wallen won’t be at the ACM Awards next Sunday, but his face will be plastered all over Nashville.

According to Music Mayhem Magazine, an anonymous group of fans got together to raise money for a Morgan Wallen “Entertainer of the Year” billboard up in Nashville. And while they planned on raising enough money for just one billboard, they wound up with enough cash for SIX whole billboards.

The billboards include messages such as “His Fans Choice Entertainer Of The Year,” his signature saying “GAHT,” as well as the bible verse Mark 11:25, which reads:

“And when you stand praying, if you hold anything against anyone, forgive them, so that your Father in heaven may forgive you your sins.”

The fan also stated that they plan on putting another billboard up in Wallen’s hometown of Sneedville, Tennessee.

Here’s a few pictures of billboards:

Of course, all of this comes on the heels of Morgan’s widely-publicized racial slur incident that subsequently got him banned from this year’s Academy of Country Music Awards as well as suspended by his record label, dropped by his booking agency, removed from multiple radio stations and playlists, and more. The ACMs released the following statement in response to the ban:

We have made his management team aware of the decision. The Academy does not condone or support intolerance or behavior that doesn’t align with our commitment and dedication to diversity and inclusion.”

Morgan has also since apologized for the incident, and has promised to do better, however it remains to be seen when he’ll make his return to the format. Jason Aldean recently expressed his desire to see Morgan come back “sooner rather than later,” and Jimmie Allen has also called for forgiveness. Eric Church recently weighed in as well, calling the incident “indefensible,” while also adding that he hoped Morgan was working on himself.

Also, his recently released double album, Dangerous, was the #1 album in country music for the past 11 weeks, and was the number one album on the all-genre Billboard 200 chart for 10 straight weeks. Only a handful of country albums have ever accomplished that many weeks on the chart in total, let alone consecutively.

So while we don’t know when Morgan Wallen will be back in the spotlight, we do know one thing…. that his fans are still as loyal as ever.