The new “In Between” music video gives fan an inside look at all sides of McCreery. From his high-energy performances on stage, to the quiet moments at home with his wife Gabi and puppy Moose, from late nights drinking with friends, to golfing with his buddies and more. The video also includes never-before-seen footage from the McCreerys’ honeymoon in Bora Bora last year.“One of the things I’ve learned through traveling around the country is that people are a lot more alike than we are different,” said McCreery. “We’re all rarely 100% one thing or the other. We usually are somewhere in between. Using that as the theme, I think this video gives viewers a good idea of what the different aspects of my life are like.” Are Morgan Wallen’s ‘Dangerous Sessions’ Better Than The Album Cuts? Lone Wolf Chases Down Herd Of Bighorn Sheep, Drags Slowest One Back Into The Forest Mountain Lion Tries To Break Into Cabin, Stares Down Man Inside Like It’s Hunting Him 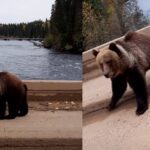