In a groundbreaking and extremely scientific study, researchers discovered something anyone living in Iowa already knows: we love our Busch Light. A lot. 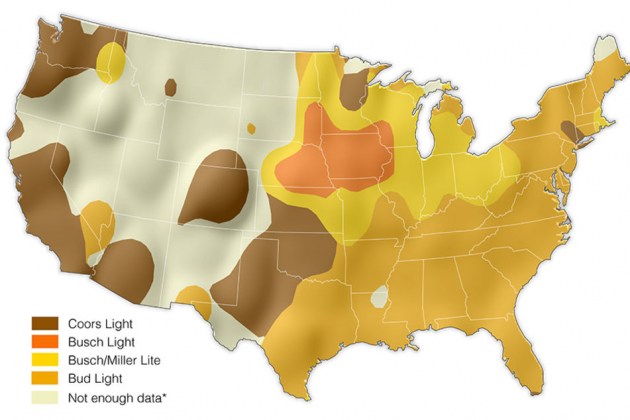 So much so, that according to the Iowa Wholesale Beer Distributors Association, nearly 16 million gallons of Busch Light were shipped to Iowa in a single year. These noble researchers also did the math for us and that comes out to a humble seven gallon pony keg per every adult in the state.

The Geography of Beer: Regions, Environments, and Societies released a map (photo above) showing Iowa is Busch Light country, as are the areas bordering Iowa. No other part of the U.S.A has a more concentrated Busch Light guzzling population than Iowa.

A former student at the University of Iowa myself, I can say that a good number of these “adult” Busch Light connoisseurs reside in Iowa City. The rest are throwing down in some shed out on their classmate’s farm.

The best part about Busch Light, other than its impeccable affordability, is the fact that it’s enjoyed by all Iowans, young or old. Hey Iowa readers, raise your hand if you’ve ever cracked a cold one with your parents and their friends around some cheap fold up table at a graduation party of bellied up to the basement bar.

That’s what I thought.

Busch Light, Busch Latte, Blue Smoothie, whatever you wanna call it, we Iowans love it.

Even the ones in Ames.

Nothing, and I mean nothing, wins a tailgate like a few 30 racks of Busch Light, some grilled meat, and 90s country pumping out of the speakers.

I’ll drink to that.