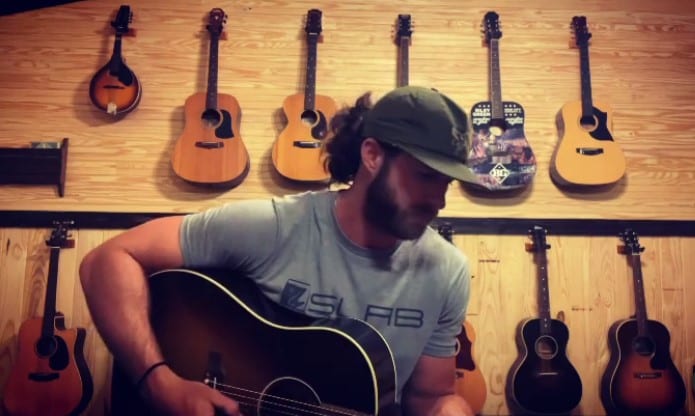 There are very few people who can do a Randy Travis song justice.

That voice is just once in a lifetime.

But, I would put Riley Green somewhere on that list if I had to make one. He has that neo-traditional country sound and immense respect for the history of the genre.

In honor of Father’s Day yesterday, Riley posted a sweet cover of Randy’s 1990 classic “He Walked on Water.” The track was release as the third single from Randy’s album No Holdin’ Back and peaked at #2 on the Billboard Hot Country Singles charts.

Riley took to Instagram to share his rendition, noting that it’s the first cover he’s done in the barn he just built at his home in Alabama (which he’s been chronicling on snapchat and Instagram stories):

I don’t think he could’ve picked a more perfect song. He’s got me over here teary-eyed on Monday morning.

Riley shared his own tribute to his dad on Instagram yesterday, too, with the caption:

“Happy Father’s Day to the man that taught me how to swing a 28oz estwing hammer, how to use the backboard when you shoot a layup and to always grab the heavy end. Now we just like that Tiger Woods and his daddy.”

And y’all know we love to celebrate dads here at Whiskey Riff, so if you missed anything yesterday check out some of the advice Matthew McConaughey got from his dad, Budweiser’s tribute to stepdads, a few tracks if you were missing your father yesterday, and even some of the greatest father/son duo’s in country music.