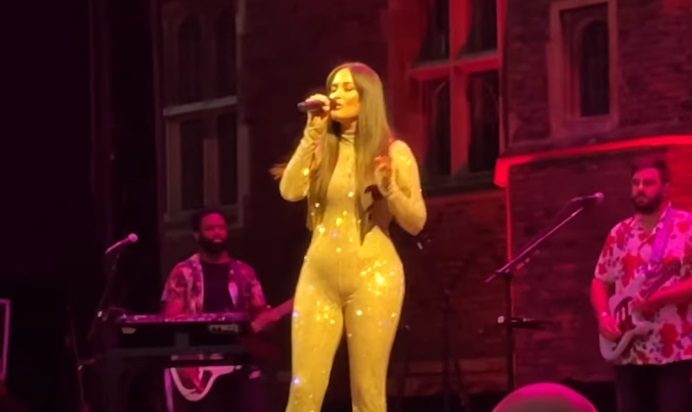 Kacey Musgraves has the voice of an angel.

And she showed off her stunning vocals on her reimagined version Elvis Presley’s iconic #1 hit “Can’t Help Falling in Love” for the new biopic that’s in theaters now.

This movie version is somehow even slower and more mellow than the original, but it fits her style and allowed her to show off her pure voice that was honestly made for a song like this.

And at a stop on her European Star-Crossed tour at Hampton Court Palace in England a couple weeks ago, she delivered a beautiful, live cover backed with a heavy piano arrangement that is just stunning.

I was hoping she’d work the song into her set list going forward, and though I have no plans to see her live anytime soon, I hope she keeps it on there forever because I could listen to her sing the classic all day long.

Of course, the original tune was recorded by Elvis for his 1961 Blue Hawaii album, and was written by Hugo Peretti, Luigi Creatore and George David Weiss. It eventually peaked at #2 on the U.S. Billboard Hot 100 chart and #1 on the Adult Contemporary chart in 1962, ultimately becoming one of his signature songs.

Kacey opened the performance by saying she’d always dreamt of working with director Baz Luhrmann, and got a random call a while back from him asking her to sing on the movie soundtrack:

“I will work with Baz Luhrmann somehow, in some capacity. And then I randomly get this call from him, and he says, ‘Hey, I really want you to be part of this soundtrack for the new Elvis movie. I think it’d be really special.’

It was a really cool moment for me, and I can’t wait to see the movie, it looks incredible. It’s actually out in a couple days, but you’ll hear this in the movie.”

Well, her dream eventually came true, and now I get to listen to her beautiful cover anytime I want: