This is one of the funniest, almost light-hearted, road rage-induced, verbal threats I’ve ever had the pleasure of watching.

It’s from a few years back, but it’s making the rounds on Reddit again so I just couldn’t go without sharing it.

There isn’t really isn’t too much backstory here but from my critical analysis of the context clues (and a word from the driver) it sounds like our 45-year-old Sammy Hagar clone with some rage issues was standing somewhere in the street when our 20-something driver passed him in the other lane.

Sammy (as he shall henceforth be known) claims he almost ran him over and was looking to pound this young fella’s dick into the dirt.

Road rage maniac tries to fight a dude half his age and makes a complete fool of himself pic.twitter.com/0r8GR4YAx9

My god, where to begin…

There’s so much comedy gold in this clip, it’s almost too much to handle and the best part is that they both keep laughing throughout the entire exchange.

It’s almost like the old guy wants to insult him as much as possible and the young guy want to keep egging him on with the “you’re like 50 dude” and the “lay off the steroids” comments, but they both know it isn’t gonna come to blows.

“You ain’t going viral when you got no nuts, bitch.”

That made me laugh too…

Welp, he isn’t, but you are Sammy.

Obviously, the best part of the entire thing is when he threatens to beat his dick… and immediately can’t help but laugh at himself for such a threat.

I mean, just look at that frustration mounting: 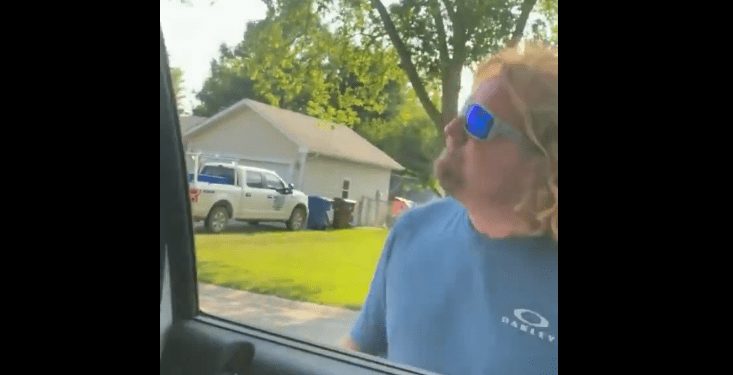 And then, he can’t help but crack up at his own threat: Ultimately it looks like cooler heads prevailed, but hell if this didn’t give me some much-needed laughs in the middle of the week.

Imagine being this guy’s neighbor though?

He’s making margaritas at 2 in the morning, blasting Van Halen because he fully embraces the fact that he looks like Sammy Hagar’s dumbass little brother, and you calmly come over to ask him to turn it down (after all, it’s a Tuesday and the kids have school).

But the next thing you know, he’s standing in the driveway (shirtless of course) begging you to throw the first punch so he can beat your dick into the dirt.

And at that moment, you decide to sell your house…