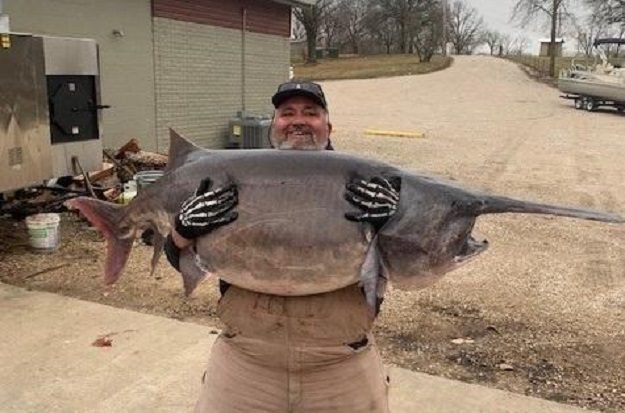 Woohoo, gotta love to see it.

Records being broken everywhere. I can only hope that one day, with the many hours that I put in, one like this will find the end of my line and make its way into the shore.

Now, I will say, if I was to break a record I hope its with a cool species like Paddlefish. They’re just one of those species that looks so strange and unnatural you can’t help but absolutely love them.

Hideous but beautiful all at the same time. I know, it doesn’t make the most sense but that’s nature.

Missouri Department of Conservation released a statement on this record setting 140-pound 10-ounce Paddlefish caught by Jim Dain. He beat the previous record by 1 whole ounce

That thing is absolutely massive.

Dain was out on a fishing trip with his family for the day and the weather kept changing on him and they almost didn’t get it out.

They ended up out there and were planning to head back after just a bit more fishing:

“The forecast was calling for storms, and then it changed to no rain, so we went out, but it just kept getting colder

We weren’t having much luck, but decided to fish for another hour so we took another turn. And that’s when the drag on the reel started. It felt like a tree was on the line!”

Thankfully, when Dain got to the boat ramp and finished pulling in this beast, his buddy told him to go get it checked out because it was possibly a record.

“We got 16 one-gallon bags of meat out of this catch.

We’ve fried it, grilled it, and made paddlefish tacos the other night. We’ll be having paddlefish for a while!”

Snagging season is off to a great start for Jim Dain! He snagged this new state record 140-pound, 10-ounce paddlefish at the Lake of the Ozarks!