Ward Davis vs The Hays, Kansas, Police Department Is The Most Hilarious Battle On The Internet Right Now Gotta get something out of the way here: I don’t know where the hell Hays, Kansas is.

I mean, I know it’s in Kansas. But other than that, no clue.

But I follow their police department on Facebook, and it’s one of the most hilarious things on social media right now.

Well sit back and enjoy the saga of Ward Davis vs. the Hays Police Department.

It’s a battle that began back in 2017, when Ward was playing a show in Hays with Cody Jinks.

Ward told the entire story in a post on his Facebook, and in a way more hilarious way than I ever could, but the Cliff’s Notes version goes something like this:

After the show, while Cody was still onstage, Ward was outside of his van smoking a cigarette when the boys (and girls) in blue walked up to his van. Now, their previous tour stop had been in Colorado so you can probably guess what Ward and his band had in his van. In his words, it was stocked with “all the weed we could afford.”

Well the police knock on the van (with Ward still standing outside) and his bass player opens it up – with a bowl in his hand.

An officer (who Ward affectionately refers to as “Officer Asshole”) starts to search the van, and while they’re doing their best to protect the fine citizens of Hays from the dangerous weed (because I can’t imagine there’s a ton of serious crime in Hays, Kansas), Cody walks out and starts cussing the police as they’re searching the van.

“A thousand drunks just left and you’re fucking with a guy that brought something nice to your shitty fucking town….”

Ward tries to calm Cody down (though it sounds like it didn’t do much good) and eventually the cops finish searching the van, find about an ounce of weed, and throw Ward and his bass player in the cruiser to haul them off to jail – which was a good 45 seconds from the venue.

Well long story short, Cody bails them out of jail, they throw the weed away in a dumpster before having a few drinks and deciding to go back for their precious green and smoke it all up, and Ward gets unsupervised probation and one hell of a story out of the whole experience.

And according to Ward, he’s glad it happened.

“I spent 20 minutes in jail and have a story to tell the rest of my life. Easy trade, man. Easy Trade.”

So, figure it’s time to fill you all in on the saga of Ward Davis vs. Hays Police Department. In 2017, while on tour…

But it seems like a hilarious story isn’t all that Ward got out of the experience.

No, it seems like he also got a mortal enemy, and he’s been trolling the shit out of the Hays Police Department ever since he posted about his experience in their fine town. Note the inscription on this guitar… 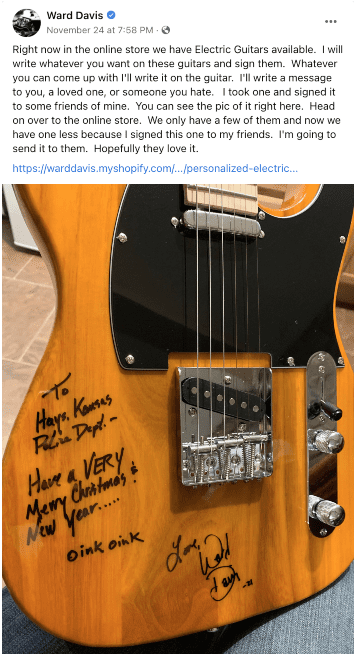 But Ward’s also taken time to give some thanks to the hardworking folks of the Hays Police Department. And he’s even used his platform to help out the department with their No-Shave November fundraiser – something that may help him out in the future if he can actually cash in on that Get Out of Jail Free card that the Hays Police Department gave him in return.

So does that mean Ward and the Hays Police Department have mended fences and he’s going to lay off them now? I guess the truce was nice while it lasted – but for my own entertainment, I’m glad Ward’s not letting up. But in the latest development in this battle between good versus evil (I’ll let you decide who’s who), Ward seems to have taken the “if you can’t beat ’em, join ’em” approach and decided to apply for a job with the Hays Police Department.

Or is it Officer Dee Z. Nuts? No word yet on whether he’ll be getting that badge any time soon – but in the meantime, Ward’s already doing his part to protect and serve the good people of Hays, Kansas. Sleep well, people of Hays. Ward’s got your back.

As for the Hays Police Department? Well they’re probably sleeping with one eye open just waiting for the next troll from Ward to come in.

And I’m absolutely loving it.