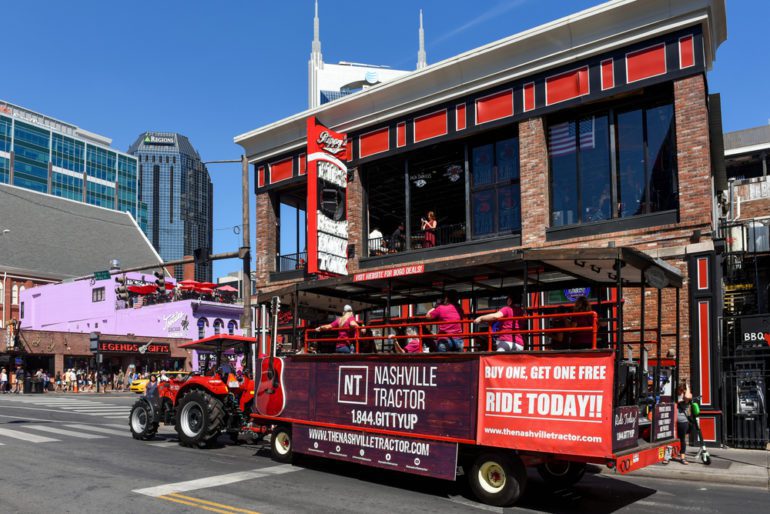 So are they just buses now?

Starting today, alcohol will no longer be allowed on unenclosed vehicles in Nashville – meaning that tourists hoping to jump on a party bus, hot tub bus, tractor wagon, or any of the other many types of party vehicles that you’ll see around Music City won’t be able to drink while they’re woo-ing and dancing to Shania.

The ban on alcohol comes after the Metro Nashville City Council passed a bill in October putting new restrictions on the so-called “transportainment” industry.

Along with new licensing and insurance provisions, the bill banned the consumption of alcohol on all unenclosed vehicles, which would include the party buses and tractor wagons.

Metro Nashville Police issued a release yesterday reminding operators of the alcohol ban, and stated that they’ll be at party bus pickup locations to remind riders of the new regulations, and will also be monitoring compliance throughout downtown Nashville.

Luckily (for visitors, not for locals), pedal taverns aren’t affected by the ban.

The bill passed the city council 33-3 in October, despite the industry warning that a ban on alcohol would likely mean the end of their business.

All of this comes after the debate reached a boiling point when a Michigan man was hospitalized after falling off a party bus and being run over.

But if you were hoping to visit Nashville and hop on one of the (many) party buses with the rest of your bachelorette party, you may still be able to do that at some point in the future.

The sponsor of the original bill, councilman Freddie O’Connell, has introduced a follow-up bill that would establish a permitting process for the vehicles to continue to allow riders to bring their own alcohol onboard, or potentially allow for alcohol service and sales on the party buses (something that hasn’t previously been allowed to this point).

So we’ll see what happens in the future, but for now, lotta people are gonna wish they had just paid the $2 to take the city bus because at this point it’s gonna be basically the same thing.