NASCAR Driver Bubba Wallace Expands On Previous Kyle Rittenhouse Take: “We Still Have A Lot Of Work To Do” 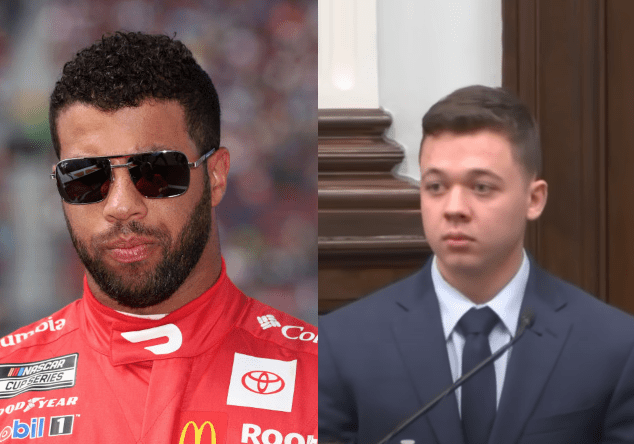 It’s been over a week since Kyle Rittenhouse was found not guilty of murder, after a jury decided that he acted in self-defense shooting three people at the Jacob Blake protests in Kenosha, Wisconsin, last summer.

Two of the men he shot, Joseph Rosenbaum and Anthony Huber, were killed. The third, Gaige Grosskreutz, was wounded.

Everybody and their mother had an opinion on the case, including many celebrities, musicians, and athletes, sharing their comments and feelings on the verdict.

NASCAR driver Bubba Wallace, expressed his disdain for the verdict, tweeting out:

“Ha, let the boy be black and it would’ve been life… hell he would’ve had his life taken before the bullshit trial.. sad”

He tweet drew a multitude of responses, some in agreement, and some in complete disagreement.

He has since tweeted out a thread, further explaining his thoughts behind the verdict, and race relations in general:

The silver lining is that anyone can do something. Channel your frustration to make positive change. Vote. Support a cause that speaks to you. Raise awareness. We need people to run for office, we need lawyers, we need judges, we need doctors, we need teachers, we need volunteers

It appears that his intentions were to take a much less divisive rout to what he originally said, but after the thread, he still received a broad range of comments:

You are correct Bubba, there is a HISTORY of this, but we, as a country, are improving. As you said, we can all do better. We are doing better. Just last week, 2 defendants were both found not guilty of murder for self defense. 10 years ago, we know that would be different.

Your message of love, compassion, and understanding is admirable. Love of country seems real for you, so long as you don't decide media types like Don Lemon, Joy Reid, and Nikole Hannah-Jones are your political guiding lights.

I highly doubt you see this. In case you do , self defense is a basic right. For you to disagree with that with vague statements and hints is disappointing. We all should strive to be the best we can be. However, if we cannot agree on the rule of law and rights, we’re at an EP

Bubba, thank you! What you tweeted the first time was and is understood by the African-American Community and POC. We must have these uncomfortable conversations. Why? Black families, Black citizens sitting around the TV, cell phone or lap top stated the same thing you tweeted.

Crying racism every time something does not go your way won’t fix anything. You want change step up and do something about it. A turtle sticks it’s neck out move forward. Be the lead turtle. I for one proudly stands with you

I agree. We’re all going to have various opinions about things, but that’s life. As the old saying goes … if you don’t stand for something, you’ll fall for anything.

I stand by you, my friend. https://t.co/1QydTHnIzM