Announced today, Post Malone has revealed that he will once again be teaming up with Dwight Yoakam’s band, but this time, to record a full-blown country record. Yes, you heard that correctly… Post Malone is FINALLY recording a country album.

I’ll give you a moment to breathe…

According to Billboard, the new album is set for release sometime towards the end of the year, and will feature Dwight Yoakam’s backing band, however no additional details, such as title, producer, release date, etc… have been revealed.

In a statement, citing Johnny Cash as one of his primary musical influences, Post said that his new project will have a little something for everybody:

“I wanted to create something everybody can get down to. People who like country will like it. 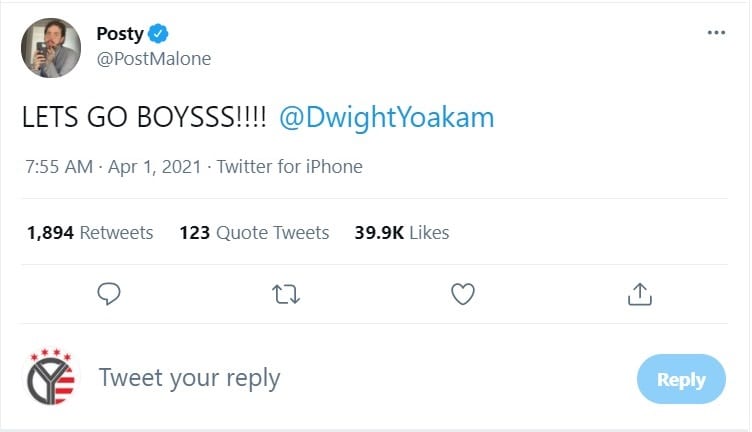 Of course, during Matthew McConaughey’s “We’re Texas” event, Post dropped everybody’s jaw through the floor, joining Yoakam’s band for two phenomenal covers. He led off with a performance of Brad Paisley’s “I’m Gonna Miss Her” (and crushed it) and then closed out the entire show with Sturgill Simpson’s “You Can Have The Crown.”

No word yet on who will be producing the new country project, however Sturgill has said that he would love to produce a live instrument album for Post Malone…and with Post recently covering his song, it’s not crazy to think that it could happen, at least in part. We could also possibly see Dwight himself at helm.

Post has said on more than one occasion that he would like to work with country artists, everybody from Toby Keith to George Strait, so could we see more collabs on the album? Definitely possible. Probably not George Strait, but one can dream, right?

Stay tuned for more details, but in the meantime, check out his phenomenal performance of Sturgill Simpson’s “You Can Have The Crown.”

If you haven’t figured out by now, this is clearly an April Fools joke.

With today being April Fools Day (a fan favorite and time for us to get creative) we thought, why not tackle something that isn’t quite out of the realm of possibility?

I mean, after that jaw dropping “We’re Texas” performance, why couldn’t Post drop a country record? He’s said that he wants to. Team up with Dwight’s band again, get Sturgill Simpson to produce it, I think it would actually be a really cool project that fans, both country and not, would absolutely LOVE.

How can you not love this dude?

I’m just trying to be as happy as Post Malone jammin’ out to Grundy County Auction.@PostMalone @JM2Squared pic.twitter.com/kS28P8BPIL