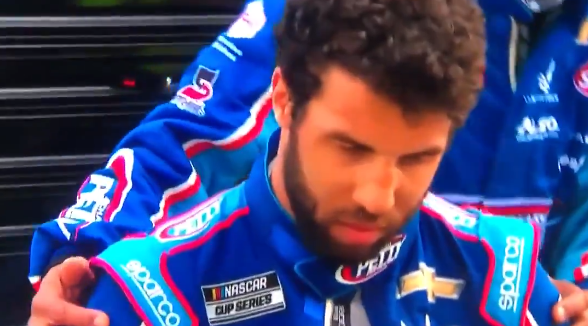 It was a hot one in Atlanta today, and it appears as though Bubba might have been suffering from some heat exhaustion/dehydration after the race.

According to Yahoo Sports, Bubba fell to the ground after he got out of his car, and then appeared to pass out once again mid-interview with Fox’s Jamie Little.

He was given medical attention and appears to be doing ok, however it was definitely a scary moment for sure. If nothing else, it reminds you just how much these drivers put themselves through.

We’ll definitely keep an eye out for any more news and update as needed.

According to the AP pool report: Bubba Wallace was taken by ambulance to the infield care center, where to be appeared to be sitting up as he was taken inside on a stretcher.

Bubba, who is the only black driver in NASCAR, also donned an “I Can’t Breathe” t-shirt before the race which also featured a word from NASCAR President Steve Phelps on racial injustice, followed by a 30-second moment of silence.

A moment of silence and a message from NASCAR President Steve Phelps and drivers. pic.twitter.com/jy1U48qeLX

Many race fans took to Twitter wish Bubba well, however some of them also expressed concern for Ryan Newman who appeared to be in rough shape as well.

Let's take a moment to send some positive vibes to @BubbaWallace, @RyanJNewman and all the other drivers in today's race. #NASCAR

Hope Bubba Wallace is going to be ok. Definitely had some heat exhaustion after the race. Ryan Newman looked absolutely beat, as well. #NASCAR

UPDATE: Bubba is all good.

Got sent to the Gulag..