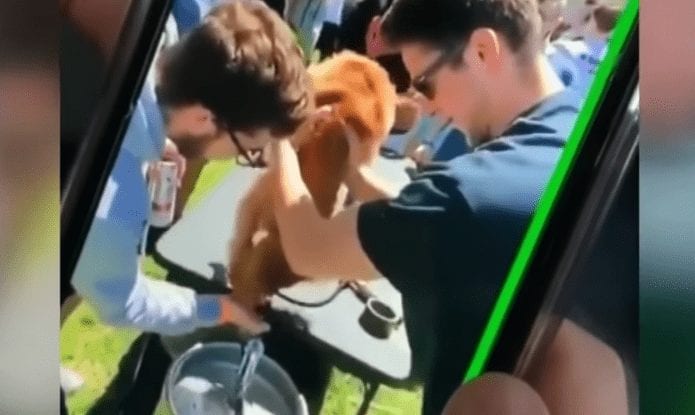 What is wrong with people?

A fraternity in Long Island, New York, has been suspended after video of an Alpha Epsilon Pi party at Hofstra University surfaced, showing fraternity members forcing a puppy to do a keg stand. According to CBS News, the fraternity reacted to the incident, saying in part “Alpha Epsilon Pi International has placed our chapter at Hofstra University on ‘cease and desist’ due to suspected violations of our health and safety policies, meanwhile, punishment for the students involved is still pending investigation.

“It’s wrong on every level. It’s just not rational thinking,” said Gary Rogers of the Nassau County SPCA. According to Rogers, the owner of the 10-month-old pup is one of the men in the video and he may face charges.

“A misdemeanor for failure to provide adequate sustenance and overdrive and torture of an animal,” Rogers said.

This is the world we are living in right now. A few cold beers and all common sense immediately goes out the window for the sake of a 5 second video and two seconds of internet fame. Thankfully is doesn’t look like the dog actually drank any of it, but still, how dumb could you possibly be to film this and put it on the internet? Top of their class, I am sure…

Despite what happened to the poor pup, investigators say he will be returned to his owner.