Some days I really hate the internet.

But some days, a woman burns a pumpkin pie so bad that it looks like she tossed it in a volcano and then tries to blame the pie company before getting hilariously roasted in the Facebook comments section.

Ok I’d say that’s only happened once, but I can’t get enough of it and it makes this shitty website worth it.

It all started when a woman named Sharon posted a picture of her pumpkin pie – or what used to be a pumpkin pie – on the Marie Callender’s Facebook page.

The pie had been scorched and was so black that it looked like something a college kid would do after getting home drunk at 2 AM and falling asleep with food in the oven.

But for some reason, Karen – I mean, Sharon – seemed to blame Marie Callender’s for ruining her Thanksgiving dessert, and posted on their Facebook page to let them know about it. 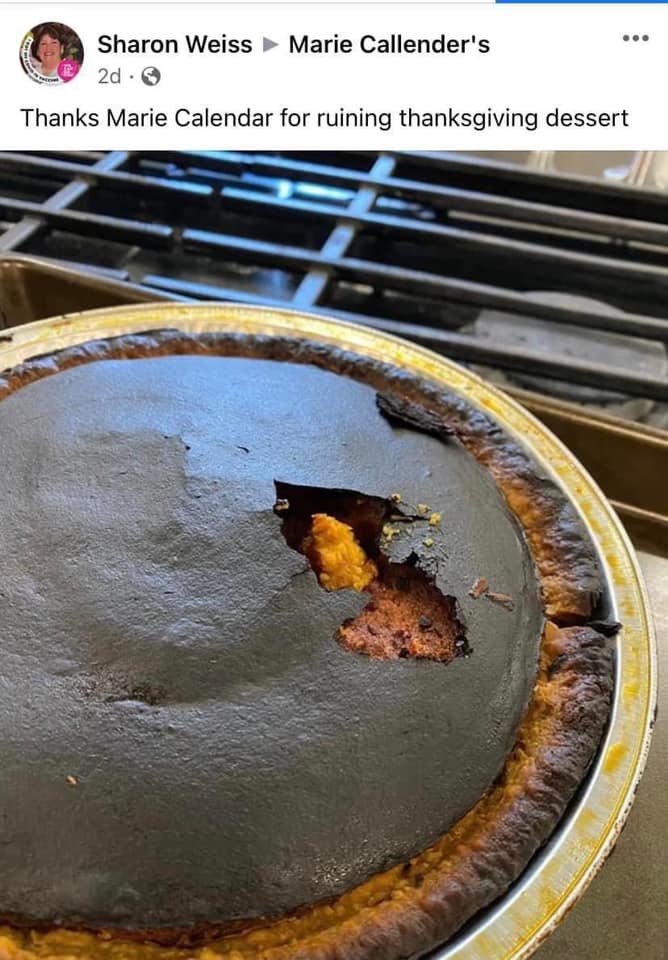 Sorry Sharon, but that’s not Marie’s fault. Pretty sure Marie Callender didn’t personally come to your house and drag Satan’s ballsack across your pie in a twisted attempt to ruin your Thanksgiving.

And I mean, I get it. I can’t cook either. I’ve burnt more shit than I should probably admit. Hell, one time I set the oven on fire trying to cook chicken nuggets. But did I blame Tyson? No, I put the blame squarely where it belonged: On Jack Daniels.

The real hilarity ensued in the comments section of Sharon’s post, where folks quickly jumped in to defend Marie Callender’s honor and roast the shit out of Sharon just like she roasted that poor pumpkin pie.

“Ma’am where in the recipe says you gotta bake it in the actual SUN?”

“I get it, Sharon. I didn’t put enough coffee grounds in the coffee maker this morning, and the coffee came out weak. Thanks Marie Callender’s!”

“Just a side note, I think it’s time to change the batteries in your smoke detector, Sharon.”

“Pretty sure the instructions don’t say “yeet pie into sun”, so

“You do know the fire alarm isn’t a timer right?”

“Someone had a little too much thanksgiving wine and turned the broiler on instead of the oven.”

“Thanks to Marie Callender, my wife left, took the kids, the house and even the dog and all I have left is the credit card debt she put us in”

“The hole in the top tells me you really tried to see if this is edible. I admire the optimism.”

“Sharon, the smoke alarm wasn’t cheering you on. It was having a f***ing panic attack”

“Were you waiting on Marie to come and take it out of the oven for you??!!”

“If you didn’t smell that while it was bursting into flame in your oven, you need a COVID test, STAT.”

“Don’t know if the directions specified this, but it was supposed to go in the oven, not the fireplace.”

And of course there were plenty of fire memes to go along with it. (Not as fire as the oven Sharon cooked this pie in though). 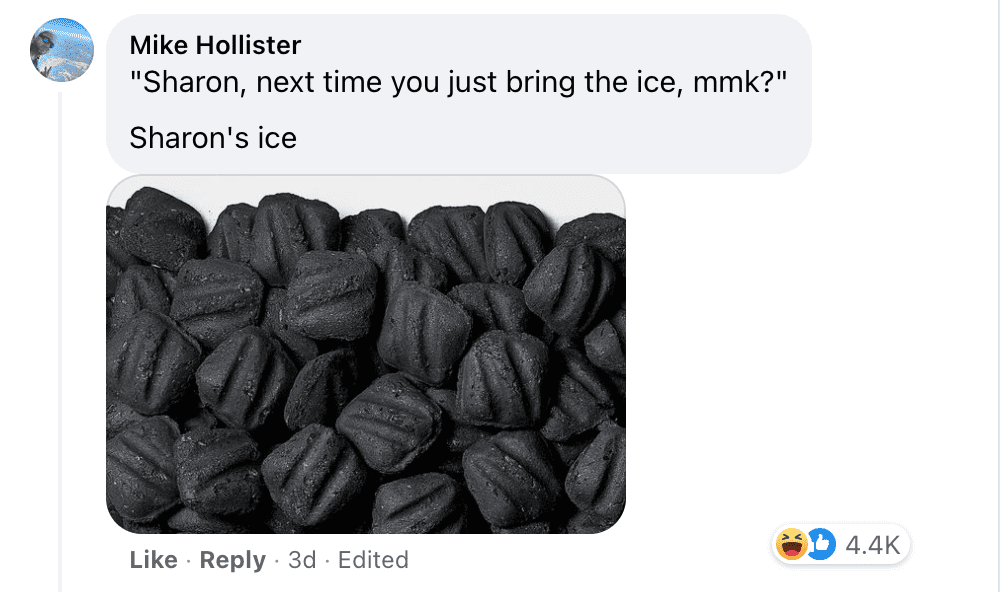 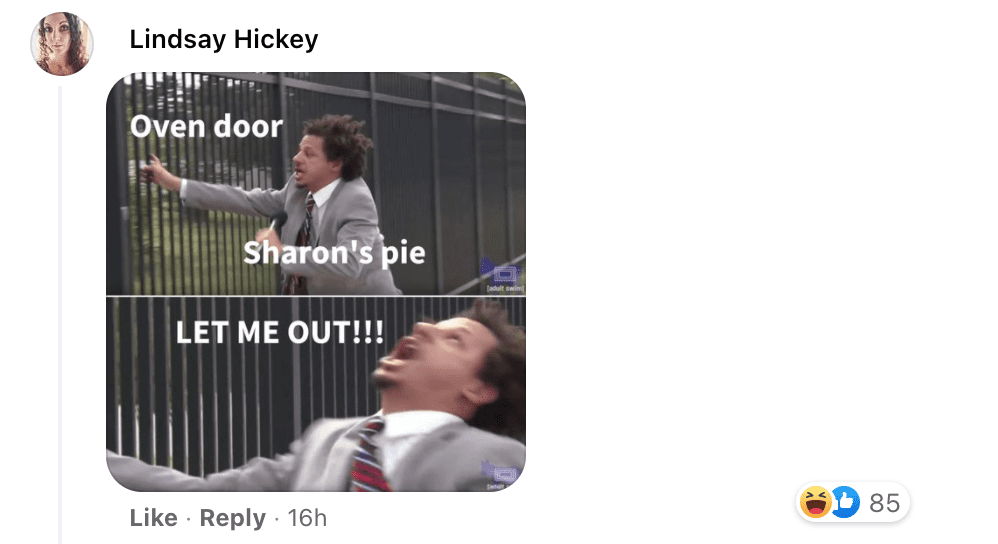 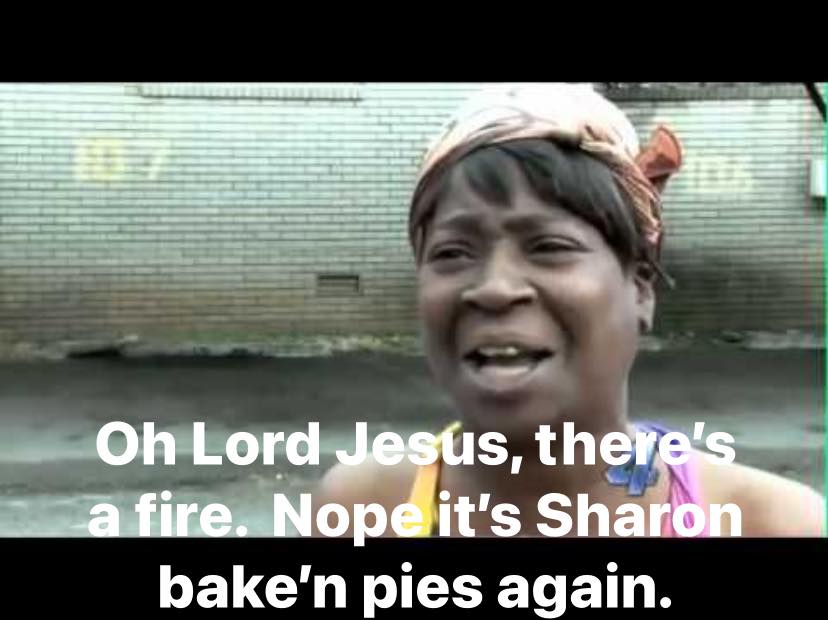 Marie Callender’s even responded to Sharon’s post and apologized for ruining Thanksgiving (when, again, it was obviously not their fault), which just opened poor Sharon up to more roasting.

“Marie Callender’s please tell me you aren’t going to reward this reckless woman with a free pie. She will burn down the entire neighborhood trying to prove her innocence.”

“Marie Callender’s please send her a larger version of the back of your box.”

Unfortunately the post was deleted after well over 19,000 comments.

Let’s just hope that Sharon’s neighbors have their fire extinguisher ready this Thanksgiving just in case she decides to give Marie Callendar’s another shot.