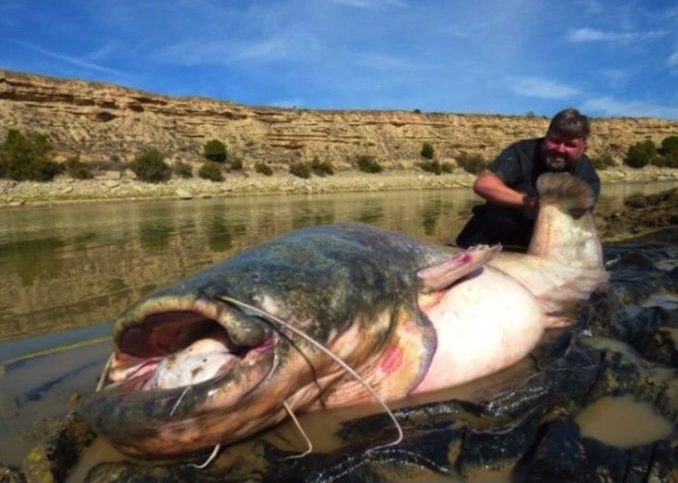 An Englishman who recently took a fishing trip to Spain wound up hooking an absolutely epic fish that is so big that it looks more like a whale than it does a catfish. The picture is absolutely incredible, and the humongous fish just dwarfs the fisherman in the picture.

Mark Steward-Brown hails from Norfolk, England. He’s caught quite a few big fish in his home country too, and his personal best wels catfish before his fishing trip abroad was 48-pounds. The weight of the fish he caught in Spain blew that fish out of the water though.

On his first day fishing in Spain, he caught four different fish over 100 pounds on just the first day. On the third day of the trip, the stars aligned and he hooked an incredible 234-pound monster.

The wels catfish is the largest species of catfish in Europe. Given how gargantuan the fish looks in the picture, it’s hard to imagine that they grow even bigger than that, but they do. On average, the fish are between 5 to 7 feet long and more typically weigh between 35 and 145 pounds.

This massive fish was just 63-pounds shy of the world record, which weighed 297 pounds and was caught in Italy in 2010.

The fish have been documented living up to 50-years in the wild and growing to lengths of over 9-feet long.

The angler who caught the massive fish shared his story with Field & Stream.

“The fight lasted 45 minutes. It was a full-on tug of war. I had to have the drag set very high to keep it away from the snags, but the initial run was still 50 or 60 meters upstream.”

Steward-Brown was fishing with his friend Billy Malcolm Williamson and two men chartered a professional guide who was able to frequently put them on some big fish, an impressive feat considering the vast size of the water they were fishing.

Halibut pellets were the preferred bait for the fishing trip, and in addition to hooking into several nice catfish, the men also caught some carp.

“I enjoy fishing for any species. But to me, catfish fight harder than any other freshwater fish.”

The fish was so massive that it took both men to hoist it out of the water.