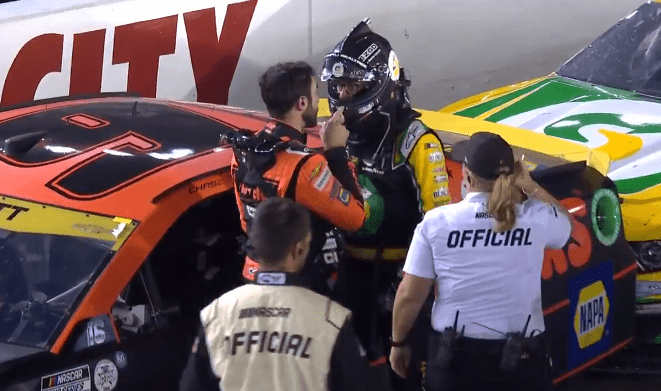 It was a hell of a finish tonight at the Bass Pro Shops Night Race at Bristol, as Kyle Larson ended up taking the checkered flag, but not without some fireworks between Chase Elliott and Kevin Harvick.

With just a handful of laps to go in the final race of the first round of the NASCAR Cup Series Playoffs, Chase Elliott and Kevin Harvick were battling for the lead, with Kyle Larson breathing down both their necks.

The #4 car of Kevin Harvick got into the left side of Chase Elliott’s #9 car, leaving Chase with a flat tire and no shot at winning the race.

So when Chase got fresh tires and back on the track, he made a point to left Kevin Harvick know that he was pissed off.

Kyle Larson wound up passing Harvick, who was struggling to get past a pissed off Chase Elliott in front of him. Chase was 3 laps down but there was no way on hell he was gonna make it easy on Harvick.

Needless to say, Harvick, who finished second, wanted a word with Chase after the race.

Ultimately, no punches were thrown, but Harvick had to be restrained during the heated exchange. Although, how the hell are you gonna get out of your car like you’re gonna fight someone with your helmet still on?

In the post race interview, Harvick said he was ready to rip someone’s head off.

Elliott says Harvick does this all the time and this was the last straw.

The two eventually walked into Chase’s hauler to talk it out and cooler heads prevailed.

But as Larson and Harvick were racing for the win, Tyler Reddick and Aric Amirola were within a car or two of making the next round of the playoffs themselves, but both fell short and will join Michael McDowell and Kurt Busch as the four drivers eliminated from playoff contention.

The next round of the playoff begins at the Las Vegas Motor Speedway with the South Point 400.

12 drivers survived The Last Great Colosseum and will fight on in the #NASCARPlayoffs. pic.twitter.com/KV98ESxOn1