A couple of days ago, we delivered the legendary news that the iconic Home Alone mansion will be available for a one-night-only stay via Airbnb, at just $25 for the night.

How awesome would that be?

Getting to live out your childhood dreams from one of the greatest Christmas movies of all time.

However, that’s not the only iconic Airbnb available that’s based off a Christmas movie.

According to USA Today, the Grinch’s Cave on Vacasa will also be available for stay at a cheap price of only $19.57, in honor of the book’s 1957 release.

Vacasa, another vacation rental company, gives you the perfect Grinch feel, as it is identical to the cave style setup the Grinch had in the movie. Located in Boulder, Utah, the mountainside cave is available to rent.

There’s even a music room with the Grinch’s organ, along with Max’s drum set.

The rental also comes with a study, main bedroom, and guest bedroom.

“Step into the Grinch’s green, furry shoes in his multilevel 5,700-square-foot lair. You can play his organ, drink from his coffee maker, read his books, and dream about all the ways you too could steal Christmas.

You’ll find a main bedroom, an additional guest bedroom, and two bathrooms—plus a study and a music room (which, unlike the Grinch, you can use for caroling). There’s also a full kitchen, which the Grinch has stocked with a few of his favorites, including roast beast, Who-pudding, and an emergency stash of Who-hash.”

Bookings are available for limited stays from December 13 through 23 at a steal of a nightly rate ($19.57) in honor of the book’s original release year.

So if you’re trying to get into the Christmas mood, but would rather stay in a smaller space instead of the giant Home Alone mansion, check out the Grinch’s Cave. 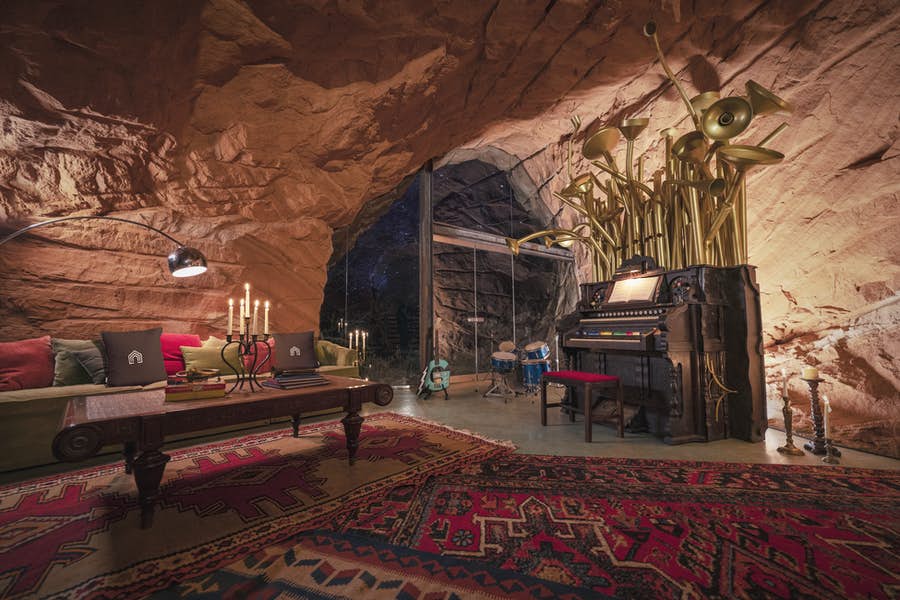