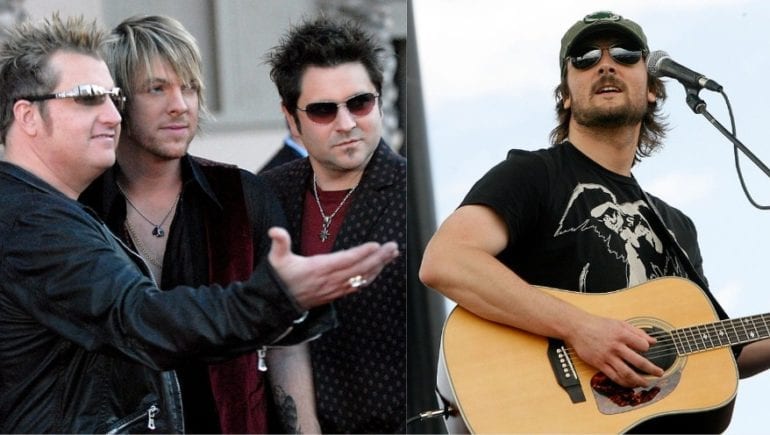 We’re dippin’ into the vault of Eric Church history today.

If you’re a die-hard Eric Church fan, following his career from the very beginning, you’re probably are already familiar with this story. Or maybe you’ve heard it, but don’t quite know all the details, and maybe it’s completely brand new. Either way, it’s a wild one.

Eric comes out on stage melting faces with songs like “How ‘Bout You,” my energy is through the roof, and then you’re gonna follow that up with Gary “The Voice” LeVox and “Bless The Broken Road?” I just don’t know it ever worked to be honest…

So Eric was opening up for Gary and the boys, but then… he got kicked off the tour.

Why? For playing too loud and too long.

According to an old interview for Broadway’s Electric Barnyard, Flatts asked more than a few times to keep it down and get off the stage on time. They even let him go on earlier, but Eric rocked just a little too hard for them:

“We asked him four times to stay to the allotted amount of time that he had to play. We sat him down in our dressing room and were like, ‘Look, we’ll put you on early so you can play longer. But please, just be off the stage because we still have to do our show.’

And for every minute that you go over time, especially in New York City, you’re charged thousands of dollars by the minute in labor fees. So the last time was Madison Square Garden. We said, ‘It’s really important that you get off on time.’”

But then at Madison Square Garden, Eric started a bit late and played 20 minutes over his time slot, ultimately resulting in his removal from the tour. According to lead singer Gary LeVox, it was a middle finger to the band:

“So we made that his last visit with us… it was kind of like a middle finger really.”

Eric later admitted to the shenanigans in an interview with Tuscon.com, but also doubled down on giving his fans a show:

“Yeah. We played a little bit too loud, a little bit longer than we were supposed to. I was a new act and I came out there and people paid a lot of money for a ticket and I was going to give them a show.

We came out and gave them a show. We got fired at Madison Square Garden, which is a fun story.”

And of course, kicking Chief off the tour opened the door for this newcomer named Taylor Swift to hit the road with Flatts…

“We were replaced by this little, young girl named Taylor Swift. I don’t know what happened to her.

Actually, she called me after I got fired. I read in the paper that we were fired. But she called and said ‘I want you to know that I love what you do.’

I joked with her, ‘This is your crowd; they’re going to love you. You’re going to owe me your first gold record.’ I was kidding, but when she got her first gold record she gave me one. It came with a note: ‘Thanks for playing too long and too loud on the Flatts tour. I sincerely appreciate it. Taylor’.”

Chief is the reigning CMA Entertainer of the Year with a new triple album on the way, Taylor Swift is a worldwide mega-star that just won a Grammy for Best Album, and Rascal Flatts apparently just called it quits.