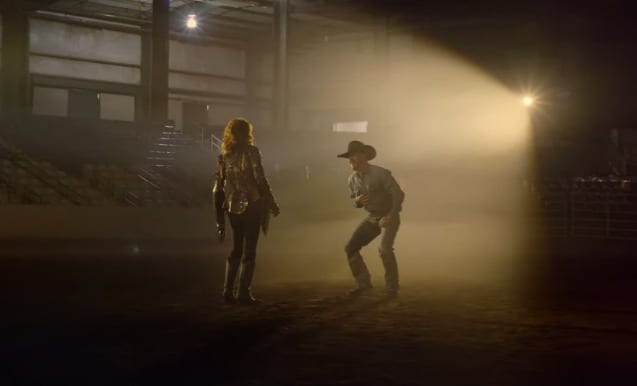 CoJo and Reba… two people that came up in the rodeo circuit before leaving that life behind for a career in country music. And while it’s safe to say that it worked out for the both of them, it’s never that easy to walk away from something you love.

And for Cody, “Dear Rodeo” is him finally processing that departure:

“I had never addressed the fact that I don’t ride bulls no more. I still get to cowboy enough, that my schedule allows, riding, cuttin’ horses and doing ranch rodeo type events, a little team ropin’ but it’s still not the same as it was for me in the portion of my life to where I was a kid.

I hate to quote Chris LeDoux, but some gold buckle dreams… and it was heartbreaking and once I really started thinking about it, I think the reason I never wrote about it was because it felt like divorce.”

So when it came time to release the song as a single to country radio, why not team up with somebody who has experienced the same exact feeling and cut a duet version as well? But not just anybody… the great Reba McEntire. And the CoJo/Reba partnership was born.

Cody has since cut a knockout version of Reba’s 1986 hit “Whoever’s In New England,” which is hopefully a sign of more future collaborations to come. I mean, I wouldn’t be mad at a Reba/CoJo tour next year (if we even have concerts next year).

But today, Cody and Reba teamed up for the brand new music video. And even if you have no connection to the rodeo world, it’s still enough to give you the goosebumps.

To accompany their new duet together, Cody and Reba sat down at the Tennessee Miller Coliseum in Murfreesboro, Tennessee,  for an intimate conversation about all things rodeo.