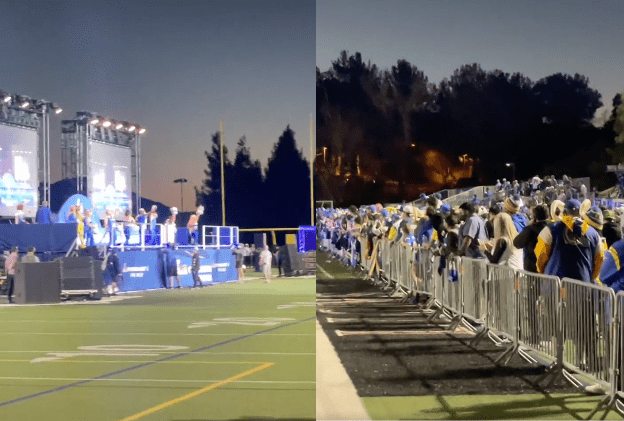 This is the saddest sight I’ve seen in a hot minute.

You already know fans are probably doing cartwheels down the sidewalks of Cincinnati over the fact that their Bengals have made it to the Super Bowl for the first time since 1989.

For the first time in what feels like ever, Cincinnati fans are rallying around their team, hoping Joey B and the boys can bring back some hardware.

They proved that at their Super Bowl pep rally at Paul Brown Stadium last night, when 30,000 fans showed up to praise their team.

30,000 tickets were distributed at the @Bengals rally tonight 🔥 #RuleItAll

However, the scene in Los Angeles was a different story…

In fact, it was the complete opposite.

For anybody with decent knowledge of NFL football, you know that the Los Angeles Rams doesn’t have much of a fanbase considering how big Los Angeles is. Even with the success of the team in recent years, they continue to struggle to fill the stands, with most home games feeling like away games for the players.

Matt Stafford’s wife Kelly said she’s never seem a stadium with more Away Team fans in it… and they came from Detroit. Hell, the organization was even begging fans to not sell their playoff tickets to opposing fans for the NFC Championship game.

With that being said, the lack of fans was deeply depicted at their Super Bowl “pep rally” last night.

It looked like it was held at your basic, average sized high school stadium, and they couldn’t even pack the stands for that.

Judging by the pics and videos, it looks like one of those middle school pep rallies that nobody wanted to go to, with teachers and administration begging you to not let your parents sign you out of class early so you can miss it.

Rams rally and they are about to arrive to the thousands of fans.
It feels so high school in the best way.
ESPN 2 now. pic.twitter.com/QA34wEepYP

The Rams have arrived. pic.twitter.com/mBCzWeFc9I

Rams look like they had 2k at a high school? IN LA?

#Rams really threw a banger of a pep rally 😂😂😂😂

This Rams rally is one of the greatest train wrecks

According to the #SBOpeningNight 3,000 rams fans at their Pep Rally.

And it's not even close.

Bengals money line all the way, this could be a stone cold ass whoopin’ in the making…