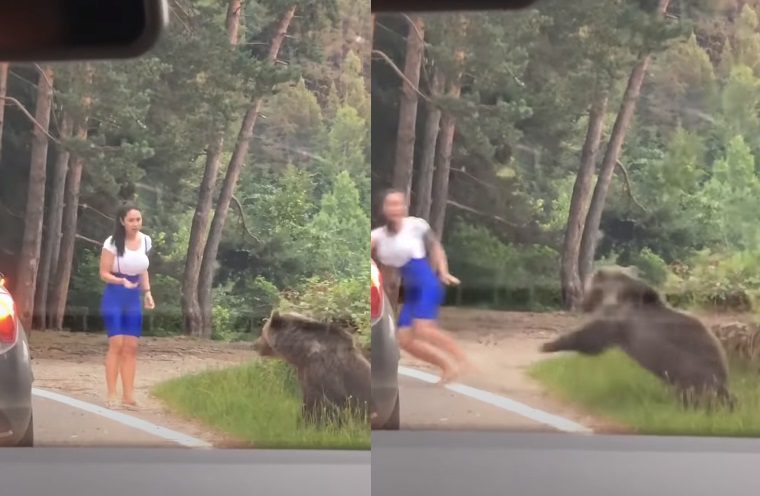 How many times do we have to see a video like this and just shake our heads?

I have a funny feeling it’s a never-ending cycle and there will always be some ignorant person that thinks they’re in a petting zoo. It’s a WILD ANIMAL lady…

And as long as Instagram is still a thing, people will continue to do dumb stuff for the sake of a picture…

If you are on the side of a road, just enjoy it from a safe distance… or maybe even, I don’t know… stay in your car? You probably aren’t a nature photographer if you are using a cellphone so let’s play it safe.

Especially with an animal like a brown bear, these things are absolute killers. It could shred you to pieces and not think twice about it.

Here, we have a crowd of people stop to watch a brown bear sitting on a roadside somewhere in Romania. A couple people are far too close but the bear seems very unconcerned about it.

Then, the dumbest one in the bunch looks around as if waiting for someone to tell her no. She looks back at the bear and takes two steps closer…

Well, the bear didn’t like that and lunged at her in one swift motion as she fleas as fast as she can.

She almost was bear food…

According to USA Today, a woman was filmed at Yellowstone last year, walking right up near a group of bears.

UPDATE: She was sentenced to four days in jail

The park ranger is caught off guard by the charging bear, but he’s able to retreat behind his truck bed and fire off some rubber bullets in self defense.

Once the bear retreats for the woods, the ranger then uses explosive devices (presumably bird bombs) to drive the bear further away with the loud noise.