Missouri Football Coach Eli Drinkwitz Nods To Luke Combs, Says “If I Wasn’t Doin’ This, I’d Still Be Doin’ This” 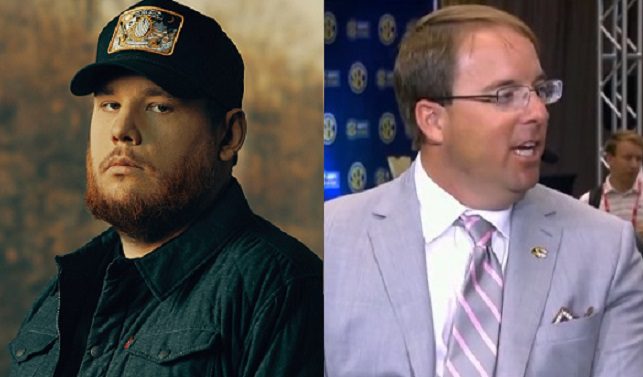 University of Missouri Head Football Coach, Eli Drinkwitz recently sat down for a pre-season interview with “Voice of the South,” Paul Finebaum, and the two steered away from typical football banter as Drinkwitz opened up about his admiration for country singer, Luke Combs.

As it turns out Drinkwitz and Combs have a few things in common, most notably the two found themselves at the same crossroads… Appalachian State University; Combs as an undergraduate student there pursuing music in the local Boone bars in the 2010s before taking off to Nashville, and Drinkwitz as a noteworthy former Head Coach of the football program, where his success later led to an opening to coach in the SEC.

Drinkwitz also said he feels connected to Combs because similarly to the country artist’s lyrics, he too feels like he’s “living the dream.”

Drinkwitz went on to share how far his career had excelled in a few short years, and compared his upward trajectory to the Luke Combs hit, Doin’ This.

In the song, Combs gets retrospective and claims that even if fame hadn’t reached him, he’d still be playing music, summed up in the line—“I’d still be doin’ this if I wasn’t doin’ this.” Drinkwitz finds Combs’ sentiment relatable, telling Finebaum even if the call up to the SEC hadn’t occurred, he would still be coaching 7th grade football in Arkansas.

Drinkwitz goes on to share some incredible personal experiences with Combs:

“Ya know Luke is an App State grad, and when I was first at App State that’s when he was first getting started… He was always good to us after big wins, he’d give us a call and a text message, I just have a tremendous respect.”

Paul Finebaum shared the same feelings for Combs himself, even relaying that he listens to Combs when he is out running!

“He’s kind of like… ugh, he’s not like me, I mean he’s way more successful than I am, but he’s living a dream, and he’s still embracing who he is, and that’s pretty awesome.”

Check out the interview between Paul Finebaum and Coach Eli Drinkwitz here:

Luke Combs Delivers Passionate Speech Ahead Of “Doin’ This” Performance

Luke Combs has come a long way in only five short years.

From his first smash hit “Hurricane” that put him on the map back in 2016, to releasing number one records, and selling out arenas and practically becoming the face of mainstream country music, it’s safe to say it’s been one helluva ride for the North Carolina native.

Of course, Combs along with everybody else in the world faced a lot of uncertainty back in March of 2020, when the world shut down due to the COVID-19 pandemic.

He recently headlined at Stagecoach this year, and in the middle of his act, he went in-depth about how he was feeling at the time COVID first hit the U.S:

And having to sit home, because I’m not gonna lie to you guys, I honestly felt on f*cking fire the second COVID hit, and it was like everything stopped for me. And I was so unbelievably frustrated, and upset and mad about it, that I realized there was nothing I could do, except wait and wait and wait.

And we did, and I sat down with Rob here, and our friend Drew Parker, we were trying to write a song, and we were talking about how we missed being able to stand on a stage in front of people that wanted to hear what we had to say, and that loved what we did every night.

And we talked about even the things we didn’t love about what we do, and I said, people always ask me in interviews, ‘What would you be doing if you weren’t doin’ this?’ And it was like a lightbulb went off in all our heads, and we had this song wrote cumulatively what Rob, an hour?…

And I want to play it for y’all tonight, because I want you to know that if I wasn’t playing Stagecoach, I would be in the f*cking bar across the road, playing for anybody that walked in… This is what I was born to do, this is what I love to do.

I feel it in my soul when I’m up here singing these songs, that this is what God put me on this Earth to do. So thank you for letting me do it for you.”

Of course, Combs went on to sing the hell out of “Doin’ This,” and how could you not after giving a speech as passionate as that?