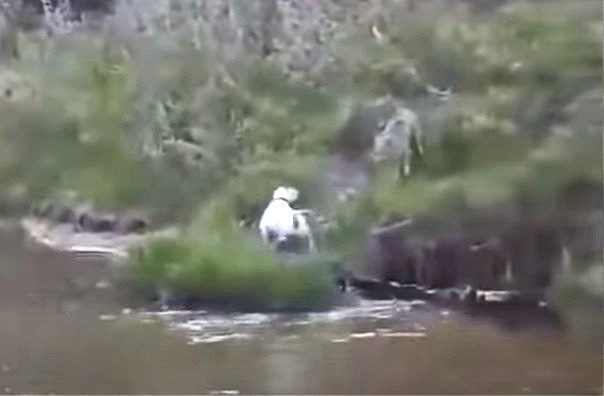 Many comments on the YouTube video point out that the wolf is in fact (or likely) a coyote, and that the pit bull is in fact a Dogo Argentino.

According to the American Kennel Club, “the Dogo Argentino is a pack-hunting dog, bred for the pursuit of big-game such as wild boar and puma, and possesses the strength, intelligence and quick responsiveness of a serious athlete. His short, plain and smooth coat is completely white, but a dark patch near the eye is permitted as long as it doesn’t cover more than 10% of the head. The ideal Dogo Argentino is a study in harmony. He is large, powerful, and athletic. His strong head is supported by a thick, but elegant neck that connects to a balanced body, which is sustained by straight, substantial forelegs and very muscular, medium-angulated hindquarters. The Dogo gives the impression of explosive power and energy. Developed to find, chase and catch dangerous game the Dogo must have a good nose, great lung capacity, and a powerful, yet agile, muscular build. His expression is alert and intelligent, with a marked hardness. The Dogo is instantly identifiable by his short, completely white coat.”

Yeah, basically a dog you most definitely do NOT want to mess with.

WATCH NEXT: Bison Tosses Man Into A Tree At Yellowstone National Park

Since we can’t tell for sure, let’s just enjoy the video for what it is – crazy and unexpected. The battle for territory in that river sends one running…

However, the top-voted commented (made by Shawn Davison) clarified the ending:

“Good thing the dog stopped chasing. This is an age old tactic to get the dog to chase. See how the Coyote immediately starts to taunt at the dog to get it to chase? The dog is then lead to where the pack is waiting and then they over power and kill the single animal that gave chase to the decoy.”

Watch it go down.