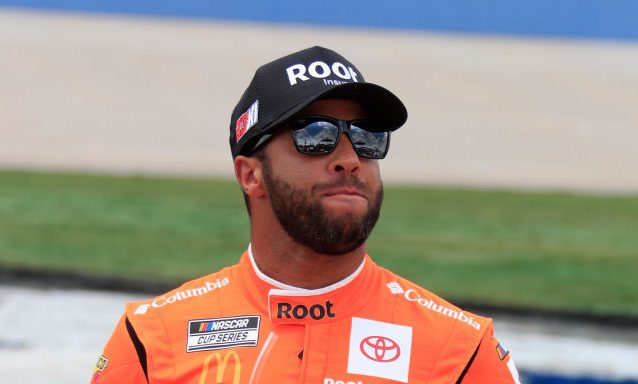 Plagued with problems all season, the 23XI Racing driver is currently sitting at 24th in the NASCAR Cup Series standings, with just one Top 5 finish on the year.

And with less than 10 races left before the playoffs start, and winless studs like Ryan Blaney and Martin Truex Jr. miles and miles ahead of him in the points, Bubba is probably just gonna have to win to get in the playoffs. With only one Cup Series win in his career, it’s going to be a tall order.

However, Bubba has had a good car this year and overall, has driven pretty well… it’s been the crew that has let him down.

At Kansas, where he finished 10th, an uncontrolled tire violation shot down any chance to win, and his 23XI teammate Kurt Busch took the victory.

In Charlotte, he got sent to the garage for not making minimum speed even though his car was good enough shape to race. His crew told him to take it easy… and it cost him the entire race.

And then he lost a wheel in Austin at COTA, earning a suspension for crew chief Bootie Barker and two other crew members a four-race suspension.

Needless to say, it’s been rough… and yesterday at Nashville Superspeedway, it got worse.

During Stage 2, Barker came over the radio and told Bubba to stop after the pit crew realized one of the tires they just replaced was too loose. Whole lotta loose wheels with this crew…

Bubba followed orders and stopped, but was then rear-ended by Tyler Reddick coming out of pit road.

Pain for Tyler Reddick as Bubba Wallace has a loose wheel right in front of him, Reddick hits him and has to make another stop#NASCAR #Ally400 @AlwaysRaceDay pic.twitter.com/2X817f4CsM

That prompted this comment from Bubba on the radio:

“You motherfuckers… leave me the fuck alone. Don’t talk to me the rest of the race.”

Instead of running near Top 5, he was now at the back of the pack, a lap down in 31st.

And later in the race, it wasn’t much better:

Bubba is fed up. This isn't what needs to happen. Hopefully Bootie can let Bubba get everything out that he needs to

Ultimately, Bubba finished in 12th place, after an unfortunate caution, and then another lucky one. But according to The Athletic, he just walked off after the race without saying anything to anybody:

And Barker gets it, although, he’d rather focus on the positives:

“He’s beat down and frustrated. But you got to look at what he did at the end. We flipped the script to give him track position and he held them off from old tires and got a decent finish out of it.

So regardless of what he says, he still battled.”

When asked why this keeps happening, Barker doesn’t really have an answer:

“It’s a reasonable question… I don’t have a great answer. We’re working on it.”

Working on it, eh? Sounds encouraging…

Like I said earlier, Bubba has driven well and has a good car this season… but you can’t win with nonstop mistakes on pit road.

I guess we’ll see next week…

The Cup series heads to Wisconsin this week for the Henry 180 at Road America.