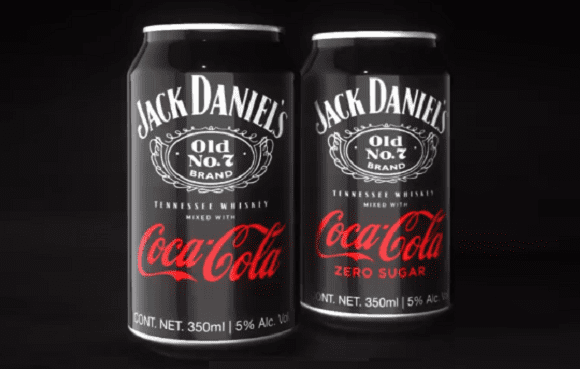 Coca-Cola is officially teaming up with Brown-Forman Corp. to create a new canned, ready-to-drink, pre-mixed version of the iconic Jack Daniels and Coke cocktail. Jack has previously sold “Jack and Cola” in a can, but this marks the beginning of new partnership with Coke.

Both brands shared the news on their social media pages today, making the partnership Instagram official:

“Two classic beverages have come together to inspire one ready-to-drink cocktail, Jack Daniels and Coca Cola.”

This sure beats the hell out of any of the new hard seltzers coming this year:

The product will be available in the U.S. in 2023, with an initial launch planned for Mexico in late 2022, and will eventually be made available in markets around the world.

The global benchmark for ABV is 5%, but it will vary depending on the country and market. And they’re also making a zero-sugar version if you’re trying to watch the waistline…

Brown-Forman Corporation CEO Lawson Whiting said in a statement that they’re excited to bring this classic drink to shelves all over the country:

“This relationship brings together two classic American icons to deliver consumers a taste experience they love in a way that is consistent, convenient, and portable.

Brown-Forman has been a leader in the ready-to-drink category since we launched our first Jack Daniel’s RTD more than 30 years ago.

Coca-Cola perfectly complements Jack Daniel’s and our existing RTD offerings, enabling us to accelerate expansion and continue to grow our business around the world.”

As exciting as this announcement is, it also sounds pretty dangerous…

I have a feeling this song is gonna take on a whole new meaning pretty soon: