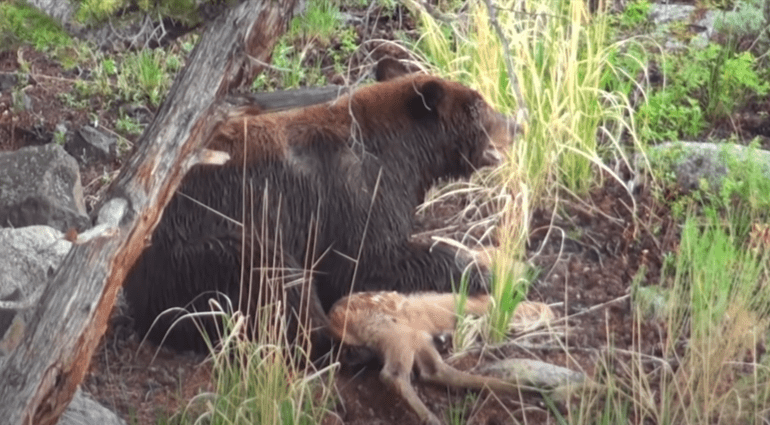 Often times the cutest and most vulnerable out there have very slim chances of surviving. Bears loves when it’s calving season. It’s the time when a good meal is easiest to catch.

Sure, they could run the risk of having to fight and elk or moose mother, but usually, it’s far easier to take down a calf than it is a full grown elk.

And then sometimes, like this case, they stumble upon a lone calf and have the easiest meal of them all.

An adult bear eats up to 30-pounds of food per day, might as well get it the easiest way possible to conserve energy for tomorrow when there’s no lone elk calf hangin’ in the grass.

A fair warning for this one… this is nature at its finest. If you don’t like the fact that these animals need to eat animals to survive, move along.

The video starts with a fair size black bear wondering around with its nose to the ground, hot on the trail of something. A bear’s sense of smell is so strong that it can smell something up to 20 miles away.

The bear finally comes up on a the elk calf laying in tall grass, make its move, and just starts throwing it around.

The poor calk can be heard crying for help as the bear goes to town on it, but not help is coming. Nature can be a wild place. It’s pretty amazing seeing these giant bears hunt regardless of how violent they may be. It’s nature in action.

The bear drags the elk all around hells half acre all while its holding on for dear life, still kicking. The poor thing had a long and violent ending to a short life. But that’s what needs to happen out there to keep things in order.

To end the insane video off properly, there is extremely clear footage of the bear laying down and eating the calf, picking it apart.

It might be a little gross, but its also pretty freakin’ awesome in its own right.