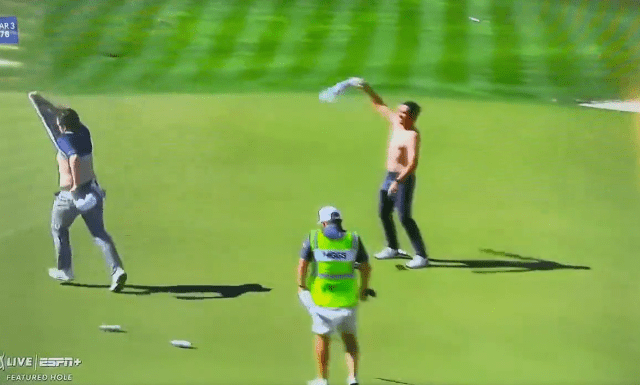 Any basic sports fan knows that golf has the least rowdy atmosphere in all of sports.

Any subtle move or noise can distract a golfer and throw him or her off their game, so the sport requires fans to be completely quiet while somebody is hitting a shot.

Those rules apply at golf tournaments all across the world…

Except for one tournament, and that’s the Waste Management Phoenix Open.

The PGA event is held at TPC Scottsdale in Scottsdale, Arizona, and it is known for their rambunctious 16th hole, which is a 160 yard par-three, surrounded by huge grandstands.

And basically, fans get there at the ass crack of dawn to start pounding beers, and by the time golfers get to the hole, everybody is about rip-shit drunk.

When golfers hit great shots, the crowd goes absolutely bonkers, and when they hit bad shots, they get booed by fans until they leave the hole.

Needless to say, it’s the most hype golf hole on the planet.

Today, PGA Tour players Joel Dahmen and Harry Higgs made sure to take advantage of their opportunity to put on a show for the crowd.

Higgs sinked a 10-foot par putt, and proceeded to rip his shirt off, and the crowd went nuts.

Dahmen then made his putt, and proceeded to do the same.

With all the hammered drunk fans in the stands, I’m genuinely surprised nobody jumped out of the stands and ran onto the course.