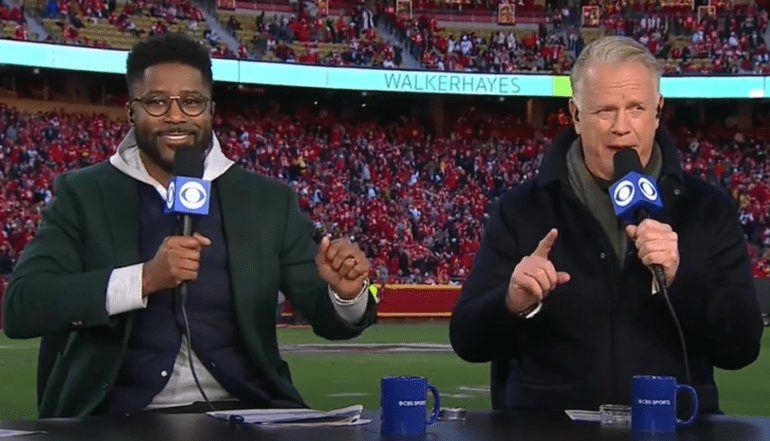 If this isn’t the perfect metaphor for that damn song, I don’t know what is.

By now “Fancy Like” is probably haunting all of our minds. No matter where we turn, it’s impossible to escape. Social media, radio, TV…that song is everywhere.

And now the CBS broadcast crew for this Chiefs/Bengals AFC Championship game can feel our pain too.

As the teams went into the locker room for halftime with the Chiefs up 21-10 over the Bengals, the halftime crew on the sideline was trying to break down the game – until they were completely drowned out by the Walker Hayes halftime performance taking place behind them on the field.

The crew tried to break down the first half of the game, but struggled to hear each other (and probably their own thoughts) with “Fancy Like” blaring in their ears.

Who scheduled a football game in the middle of the @walkerhayes concert?

The 'Fancy Like' singer was the halftime performer at the Bengals/Chiefs game, and the announcers from CBS were not amused. pic.twitter.com/VV108t9Uwg

Boomer Esaison in particular looked especially amused by the clusterfuck.

And admitted that he couldn’t hear a thing his fellow analysts were saying.

Boomer Esiason, laughing: “I have no idea what you just said…” pic.twitter.com/PYhUpK1SbH

And of course Twitter had a field day mocking the production disaster.

Fancy Like Applebees did enough harm to us at the beginning of football season that we really didn't need to have that full circle moment.

It’s 2022 and we still can’t escape the Fancy like Applebees song pic.twitter.com/wr9Cpm0u0R

Trying to listen to this CBS halftime show pic.twitter.com/iUqkwN2J9E

you: I don’t care what the numbers say you take the point—

Nantz: Evan, what did you learn at halftime?

Evan: We fancy like Applebee's on a date night…

Bill Cowher’s analysis was absolutely spot on during the halftime report, the best he’s ever done. Kansas City’s offense really has been fancy like Applebees on a date night. #NFL

They literally sat them right in front of a bank of speakers. 🤦‍♂️ https://t.co/N0Nv2emjKq pic.twitter.com/fQl7snU3x5

All I could glean from the halftime analysis during the @NFLonCBS halftime show for @Bengals and @Chiefs #AFCChampionship game was that it’s fancy like Applebee’s on date night and Patrick Mahomes is good and is going to reach the #Halo on Paramount+. Very good setup @CBS!

This halftime show is unbelievable – I feel like @Applebees secretly plotted the greatest troll in sports history. Listening to Phil Simms try to shout over “Fancy Like” is my favorite NFL moment of the year.

Doesn’t matter who you are or where you go. Resistance is futile.

There’s no escaping that song anymore…