How David Allan Coe Got Discovered Living In A Hearse, Busking Outside Of The Ryman Auditorium 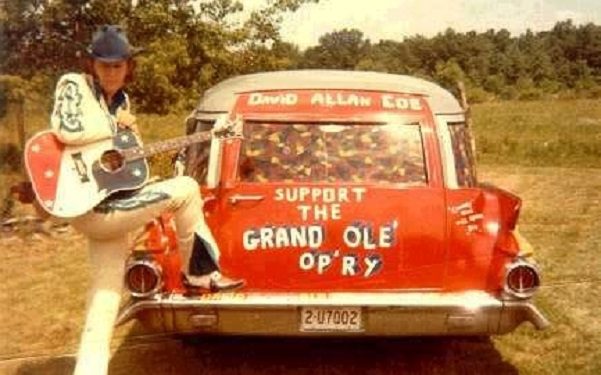 Love him or hate him, he was one of a kind…

Anybody who knows anything about David Allan Coe, knows that he will go down as one of the most controversial, “I don’t give a fiddler’s fuck what you think of me” country artists to ever live.

When you think of the genre “Outlaw Country,” Coe will consistently be one of the first names to come to mind.

But despite his wild, full-throttle upbringing, spending the majority of his childhood and early adulthood either in reform school or in the pen, to some of his unfathomable antics on and off stage over his extensive career, his contributions to the country music world can’t be denied.

Of course, we all know him for his songlike “You Never Even Called Me By My Name,” “The Ride,” and the OG version of “Tennessee Whiskey.” Not to mention the songs he wrote like Johnny Paycheck’s “Take This Job & Shove It.”

Needless to say, the man has lived a unique, “play by my own rules” lifestyle, so it’s no surprise that he got his start in one of the most obscure ways possible.

After getting into songwriting while serving some time in prison in his hometown of Akron, Ohio, he decided to pursue country music full-time and moved to Nashville in 1967.

He had hardly a dime to his name, and was homeless when he first moved to the Music City.

And what did he live in, you may ask?

A red and white Cadillac hearse, with his name on the back and the words, “SUPPORT THE GRAND OLE’ OP’RY.”

On top of that, he always parked it directly in front of the mother church of country music, the Ryman Auditorium, on weekends. Whenever people entered the Ryman for the Grand Ole Opry, he would stand on top of the hearse and play for the crowds of people coming in.

Sure enough, the gimmick worked, as a worker for an independent label liked what they heard and he was signed to Shelby Singleton’s Plantation Records. Coe’s first two albums (much more Blues in nature) were on the Plantation… Penitentiary Blues in 1970, and Requiem for a Harlequin in 1973.

After Tanya Tucker had a #1 hit with Coe’s “Would You Lay With Me (In a Field of Stone)” in 1973, he caught the attention of the major labels and signed with Columbia Records.

History that all started in that hearse…