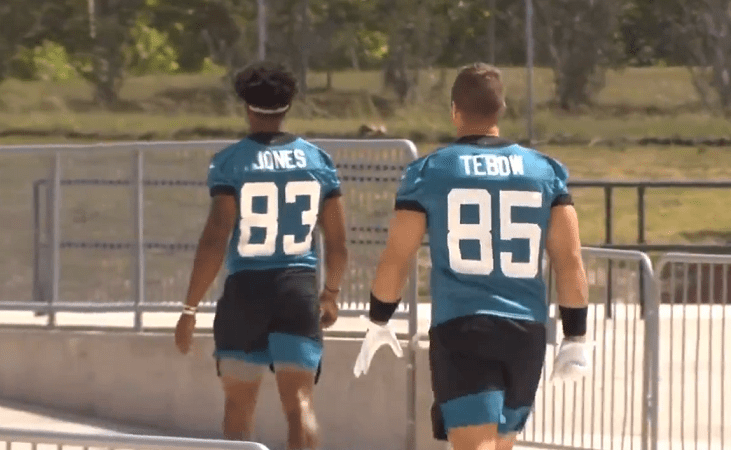 Tim Tebow and Urban Meyer are back at it again like it’s 2006.

Except this time, it’s 15 years later and it’s in Jacksonville where Tebow will be attempting to make a comeback to play Tight End at the age of 33.

Tebow last played in the league in 2012 with the New York Jets in a limited role in wild cat packages. Since then, he’s attempted a run at baseball where he played three season in the Mets farm system.

So yes, a former QB who was asked to switch to TE 11 years ago, now in his mid-30’s is getting a chance to do it again.

Here he is reporting to camp today, courtesy of News 4 Jacksonville

And as you’d imagine, the internet ran wild roasting the Jacksonville Jaguars and Urban Meyer.

This guy on the plane just told his GF the Jaguars signed Tim Tebow pic.twitter.com/cynjZFUJMn

The only Tim Tebow reaction that matters. pic.twitter.com/IllGr9k7Ma

you can’t spell “TEBOW” without “TE” people forget this

I hope Tim Tebow gets a spot on the Jaguars' roster because I fear that without sports he'd be forced to start a podcast.

If you’re ever curious why bad teams stay bad look no further than moves like this… it’s a publicity stunt.

Hope it was worth the extra jersey sales…

Mel Kiper wasn’t having it…

.@MelKiperESPN sounds off on Tim Tebow signing with the Jaguars, calling it a "desperation move."

"You can't treat the NFL like a hobby, it's a full time job!" pic.twitter.com/4BH7RVnxs4