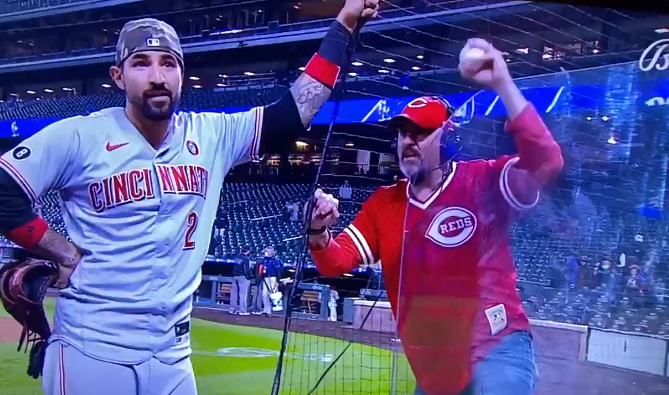 As a Cubs fan, I gotta say… I miss Nick Castellanos.

The Cincinnati Reds OF smacked a home run in the 3rd inning of yesterday’s game against the Colorado Rockies, and after he rounded the bases, he fist bumped a random Reds fan.

Why? As it turns out, the fan gave him a little motivation ahead of the 2-run dinger.

When asked about it, Nick (wisely) let the fan provide the explanation:

“I told Nick he should imagine Rob Manfred’s face was on the baseball, and the next pitch, he lit it up over the fence baby.”

"I told Nick he should imagine Rob Manfred's face on the baseball."

Of course, Rob Manfred is the commissioner of Major League Baseball so you can imagine another suspension is coming for that move.

Earlier in the season, Castellanos was suspended for his role in “instigating” a brawl against the Cardinals.

After stunting a bit on a home run, he took a pitch in the ribs during a later at bat. When he finally came around to score on a wild pitch, he might have celebrated a little “too hard” in the pitcher’s face and the benches cleared. He got two games for it.