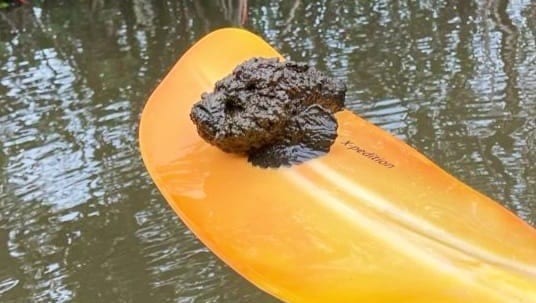 Australia. The place where seemingly every wild animal wants to kill you…

While great white sharks, saltwater crocodiles, and a wide variety of snakes get all the attention for their ability to end lives, the stonefish gets very little credit for being one of the deadliest animals down under.

Stonefish look like something your dog might drop in the backyard, but they’re actually the most venomous fish in the world. Imagine the terror of going for a nice leisurely trip on the water, only to have a hand grenade randomly affix itself to your paddle.

That’s just what happened in Australia earlier this week though, as an unsuspecting outdoor adventurer pulled up a stonefish from beneath the water after inadvertently striking it with their paddle.

Stonefish have 13 sharp spines running across their dorsal fins. The spines are capable of injecting a neurotoxin so deadly it’s capable of killing a person within an hour if gone untreated.

Found in the shallow waters of predominantly northern Australia, most incidents involving the fish stem from unsuspecting swimmers accidentally stepping on them.

The pain from a stonefish sting is immediate and excruciating and can last for days on end. Their venom has been known to cause muscular paralysis, difficulties breathing. Their stings can even send victims into shock and potentially cause heart failure.

“Unfortunately I didn’t get to see it but my partner and friend saw their first wild stone fish today! Near Townsville”

“Had a friend step on one these ugly things about 20 years ago – they were in the hospital for three months, nearly died twice.”