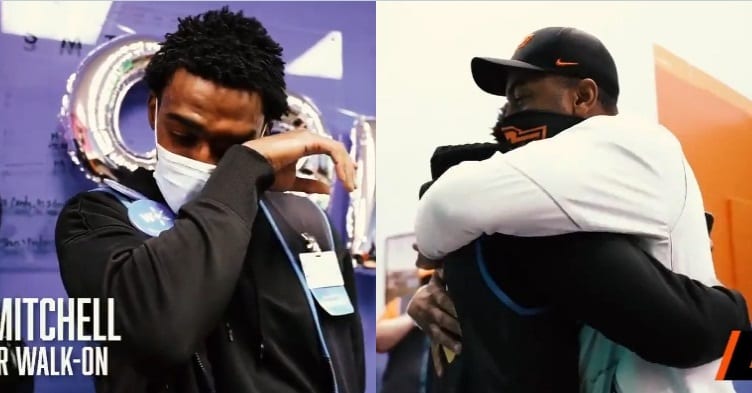 Nothing like kicking off your Monday morning with a feel-good scholarship video.

Oklahoma State basketball walk-on Dee Mitchell has been working at Walmart to pay for school. And now, going on his 3rd year with the team, Dee has finally earned himself a full-ride scholarship to Oklahoma State University.

Coach Mike Boyton and select members of the team showed up to Walmart to drop the surprise on him.

Nobody works harder than Dee Mitchell. He joined the Cowboys as a walk-on this day in 2019, and is paying his way through school thanks to his job at @Walmart.

“Incredible moment,” Boynton told CBS Sports. “Very rarely am I emotional. This one almost got me. This means everything to me. I didn’t know what was going on. It was a real surprise. It was breathtaking. It felt like I was in a movie or something.”

Back in 2018, Mitchell asked coach Boyton if he could try out… he got a “no.” But a few months later, in January 2019, Boynton held open tryouts after three players were kicked off the team and Michell made the roster. He was given another year as a walk-on for the 2019-20 season, and now, his hard work has been rewarded with a full ride.