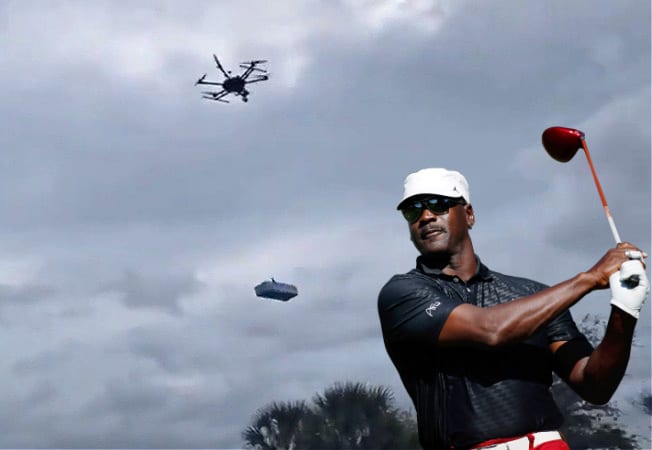 When you’re the GOAT, you do GOAT shit.

Case in point – a drone that delivers beer on your very own golf course.

That’s what Michael Jordan’s new golf course, The Grove XXIII (opened in the fall of 2019), has in South Florida.

GolfDigest has described the course as “uber-exclusive” which is no surprise.

“Seen from the patio, The Grove XXIII’s holes spool and unspool against the open backdrop of undeveloped pasture—the sea. And from the golf course, the clubhouse is never out of sight, a modernist stand-in for Stanford White’s omnipresent, wood-framed landmark.”

“The Grove XXIII (the Roman numeral represents the number Jordan wore with the Chicago Bulls) twists in an ingenious double-helix routing that can be played in four nine + nine combinations, and in shorter three- to six-hole loops. The key to the flexibility is the clustering of greens and tees, and a crossover junction after the fourth and 13th holes. Walking off the fourth green, for instance, play can continue on at the fifth, or it can switch over to the 14th and finish in the opposite direction, so each nine can be broken into sections. In fact, it’s possible to play continuous internal circuits without ever returning home, enhancing the likelihood of ongoing presses, overtimes and emergency holes.”

With COVID, I’d expect this delivery method to remain a full-go for the foreseeable future.