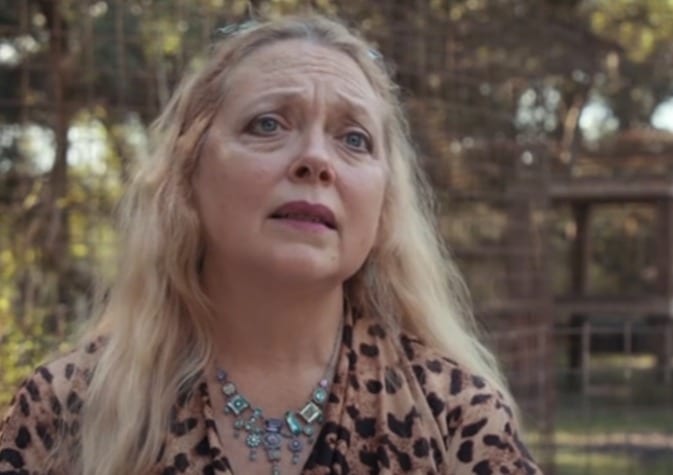 You see Carole Baskin trending atop of Twitter, and all of our minds go to the same place…

When you see Carole Baskin trending, but it’s not because they finally found evidence that she fed her husband to a tiger. pic.twitter.com/YtVunQJjTH

Welp, we have to wait for that one, but there is news from her Big Cat Rescue sanctuary in Tampa where a tiger attack took place.

A staffer broke protocol and stuck her arm into the tiger cage during feeding (why would you do that?) when the animal got a hold of her, and nearly tore her entire arm off at the shoulder.

“It is against our protocols for anyone to stick any part of their body into a cage with a cat in it,” Big Cat Rescue said in a statement

“Kimba grabbed her arm and nearly tore it off at the shoulder.”

“Candy (the injured staffer) was still conscious and insisted that she did not want Kimba Tiger to come to any harm for this mistake. He is being placed in quarantine for the next 30 days as a precaution, but was just acting normal due to the presence of food and the opportunity.”

“All of the volunteers and staff on site today met to discuss what happened. Carole reminded everyone that this sort of tragedy can happen in the blink of an eye and that we cannot relax our guard for a second around these dangerous cats. This happened on the day our federal bill to ban cub handling and private possession comes to the House floor for a vote.”

“The fact that, despite our intense safety protocols and excellent record of safety, an injury like this can occur just confirms the inherent danger in dealing with these animals and why we need the Big Cat Public Safety Act to eliminate having them untracked in backyards around the country and ending up in sanctuaries where wonderful people like Candy Couser have committed themselves to providing care for those discarded by the pay to play industry.”

Candy is expected to survive, but no word yet if her arm will be saved.

They just shared this image of Candy on Instagram, and more info.

“This morning, during feeding, Candy Couser, who has been a volunteer at Big Cat Rescue for five years, and a Green Level Keeper (lions, tigers, etc.) for almost three years was feeding Kimba Tiger. She saw that he was locked in a section that was away from where he was usually fed and radioed the coordinator to find out why. Kimba had been locked away from that section for several days as cameras were being installed there. She opened a guillotine tunnel door at one end of the tunnel, and when she went to raise the second door she saw it was clipped shut. This is our universal signal NOT to open a gate without the coordinator coming to assist, but Candy said she just wasn’t thinking when she reached in to un clip it. It is against our protocols for anyone to stick any part of their body into a cage with a cat in it. Kimba grabbed her arm and nearly tore it off at the shoulder.”

“Jane heard the commotion and came running. Kimba dropped his grip and Candy fell away from the side of the tunnel. Gina being a nurse held off the artery under Candy’s armpit to stop the bleeding and Mark, who had pulled Candy to safety, used his belt as a tourniquet as others called for an ambulance. Gina packed her arm in ice packs to try and save it. The ambulance arrived within 15-20 minutes of the accident.”