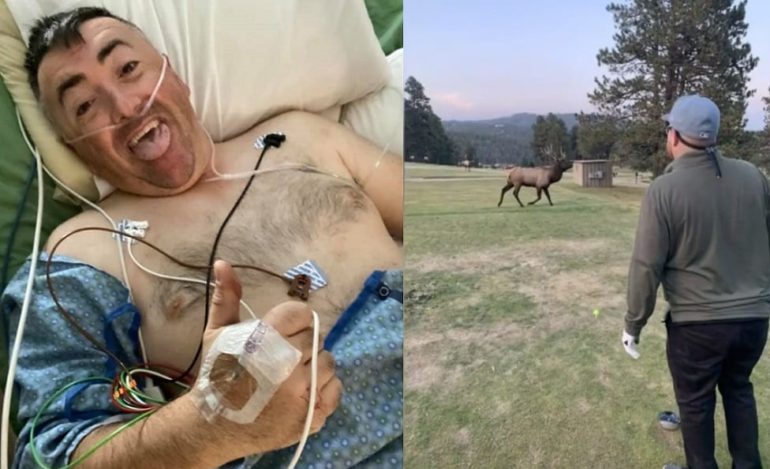 I have enough to worry about on the golf course without the threat of being gored by an elk on the fairway.

But unfortunately for Zak Bornhoft of Denver, Colorado, that’s exactly what happened to him.

According to his Facebook post, Zak was golfing at the Evergreen Golf Course outside of Denver this past weekend when he and his buddies were surrounded by a gang of elk on the course.

And while they were doing their best to keep their distance, a bull elk charged their golf cart somewhere between the 16th and 17th hole. The driver gunned it to get away, but the bull still managed to gore Zak in his right side, tearing his kidney into three pieces.

“The elk owned the property and he didn’t want us on it… I didn’t do anything wrong, I didn’t try to play with the Elk, I took pictures from a distance and zoomed in the photos. The driver of my cart is devastated but there wasn’t really anything he could do. We were just trying to get away.”

Zak is currently recovering at the hospital and the urologist thinks that his kidney will be able to repair itself (pretty wild, eh).

“Thanks everyone for the love and support for me at this time. I love golfing, I love nature, I also respect nature, but sometimes things just go wrong. That’s what happened to me.”

Great to see that Zak is in good spirits.

Long post alert!!I thought this might be the best and easiest way to update everyone on my lovely husband Zak…

His wife also shared a picture of the shirt he was wearing, featuring the hole where the antler tore through.

Zak asked me to pull his shirt he was wearing out of his belongings bag and it took everything in me to do it, but I would say the evidence here speaks louder than the story itself! 🦌 #hornhole