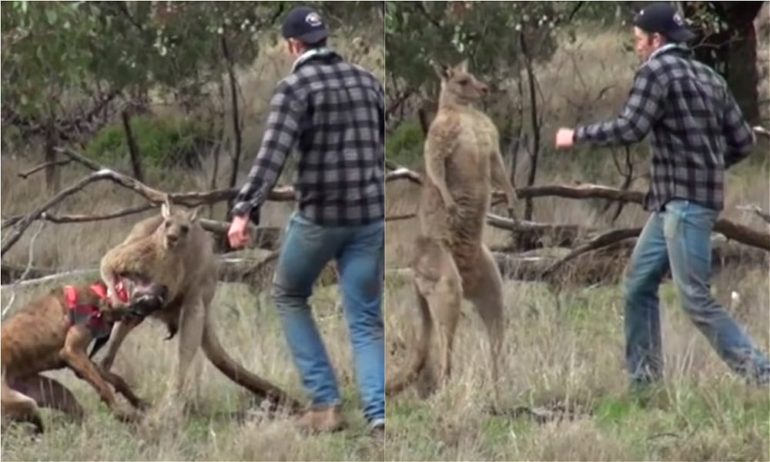 This has to be one of the craziest nature videos you’ll ever see.

Back in 2016, a video of a guy saving his dog from a kangaroo, then punching it, went viral to the tune of nearly 75M views. I totally forgot about this video until recently, and it’s even more absurd than I remember.

It takes place in the Australian Outback and shows a guy’s dog being taken by a huge, jacked, kangaroo. The kangaroo is looking to do some damage, when the owner comes running in.

The dog breaks free, and the two square off like a heavyweight fight. Kangaroos will totally mess you up (or kill you), so this dude is lucky he didn’t get his face ripped off once his dog broke free.

Here more info from the person who took the video:

“A group of hunters got together to help a young cancer sufferer (terminal diagnosis) with his last wish of catching a 100 kg (220 pound) wild boar with his dogs. One day while hunting one of the highly trained dogs was chasing some pigs by scent and collided with a big buck kangaroo that then held and wrestled the dog by its protective gear (boars have tusks like knives), the owner was horrified that his dog or the kangaroo would get hurt and run in to save both parties.

You can see the dog trying to escape, wanting nothing to do with the kangaroo. The big buck kangaroo releases the dog when the owner gets close but then moves in to try and attack the human. A kangaroo kick to the guts could easily disembowel the owner easily, so he backs off a couple of times giving the kangaroo some space but he eventually changes the roo’s mind with a punch to the snout, as it kept coming forward. The punch stops the roo and makes him think about the situation, giving the owner and the dog time to disengage from the big wild animal and leaving it to hop off and I suppose wonder about what just happened.

We laughed at the absurdity of the situation and at how unfortunate it was for the dog and kangaroo. Our 6 foot 7 inch friend felt no malice to the kangaroo but had to step in and fix a bad situation before it got worse. Young Kailem unfortunately lost his brave battle with cancer two days ago, so this hunt is part of the treasured memories his family and friends have. Having a dog get tangled up with a roo was never our aim or intention and we were happy no animals were hurt in the incident.” -Greg Bloom