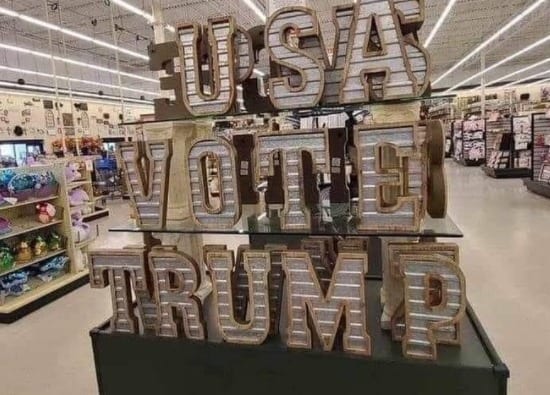 Where to start with this one…

Maybe you hate Trump, maybe you love Trump. That’s not what this is about. This is about how easy is it to cause mass outrage, especially on Twitter, over something so easily setup and planned to go viral…

Let’s say a customer in a Hobby Lobby wanted to share something on Twitter that would catch fire given the political climate.

In a few short seconds, they rearrange a cheap letter display to read:

In a Hobby Lobby pic.twitter.com/W4ASl0vqT2

Now, we have no idea if this Twitter user took the pic only, rearranged the display for the photo, happened to walk right by after someone else did it, etc..

What we do know is that we don’t know who created that display, and it’s probably unlikely the pictured Hobby Lobby had a creative idea to jazz things up in the sale section.

I doubt the store manager said “you know what, let’s get the good feng shui going and do something right over there.”

We're all aware that customers re-arrange these letters all the time, right? Call my old fashioned, but I prefer to be outraged at Hobby Lobby for making it so that employers can decide what kind of healthcare their employees can get. https://t.co/Ln2CSwLGth

— Hank Green: A Beautifully Foolish Endeavor is Out! (@hankgreen) September 7, 2020

Cancel Hobby Lobby because the store is depressing AF (at least to me it is), but use your brain when you see a photo like this. I once saw a kid doing this at an Indiana Walmart, rearranging the letters to say “DICK BALLS.”