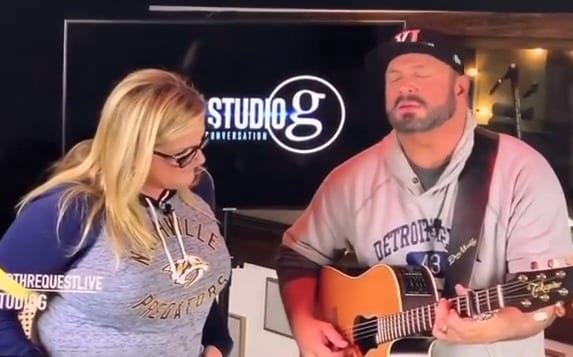 During Inside Studio G, Mr. Yearwood took requests and even had his “Queen” Trisha come by for some surprises. In typical Garth fashion, the Live video is now gone for some reason. It’s just gone. They took it down. Why? Who knows.

On Instagram Garth said, “I know I said I was going to take this down, but some people said in comments that they got kicked off because of capacity. So, we are leaving it up through the west coast airing until 8pm PT. love you all, g & T.”

Thankfully, this is the internet and people have cellular devices g!

At one point I saw 300,000 people watching this thing live. I don’t think I’ve ever seen that many people watch any live video on Facebook. Slick stuff.

Anyway, g took down the video, but the internet came through and a bunch of folks recorded the most-talked about moment when Garth and Trisha did a duet of “Shallow” from A Star Is Born.

The full live stream is still not available, however Garth and Trisha DID just release the full “Shallow” performance from last night’s concert.